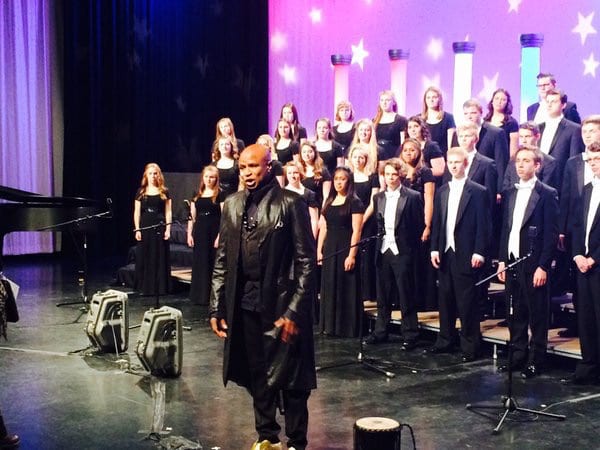 “’Celebrate America’ is a national program designed to give our nation’s youth a life-enhancing opportunity by showcasing their choirs on public television,” Janis said. The production and filming of this event was made possible through both the hard work and dedication of KBYU Eleven, music educators and Tim Janis.

The special featuring the Springville High School Chamber Singers aired on KBYU Eleven on March 11 and 19.

“Contributing to community through the arts has always been a big part of public television’s contribution to the community,” Janis said. “I am genuinely overwhelmed by the incredible talent and professionalism each music educator brought to the table. The students (at) Springville High School demonstrated tremendous dedication in the preparation of their performance. They’re an undeniable musical force and a shining example of the commitment of today’s youth when encouraged to pursue the arts.”

In the fall of 2015, 13 high school choirs were selected to participate in the televised series “Celebrate America!” from around the area. The Springville High School Chamber Singers, under the direction of Leslie Walker, elected to sing back-up for Utah vocalist Alex Boyé, performing “Wayfaring Stranger” in the “Celebrate America!” program.

Janis said, “Public television is an invaluable resource for staying connected to local programs and the community. KBYU programming helps to bring the community together.” Tim Janis is respected and well-known for the work he defines as “Music of Hope.” His career has extraordinary and inspiring highlights which include producing and supporting many philanthropic projects with artists such as Sir Paul McCartney, Billy Joel, Ray Charles, Andre Previn, and The New York Philharmonic. Additionally, Tim has produced fundraising programs for PBS along with George Clooney and James Earl Jones. Current projects include directing his new musical film “Buttons,” narrated by Kate Winslet and starring Dick Van Dyke, Jane Seymour, Ioan Gruffudd, Charles Shaughnessy and Katie McGrath, and introducing 11-year-old Alivia Clark and 15-year-old Devlin Stark.