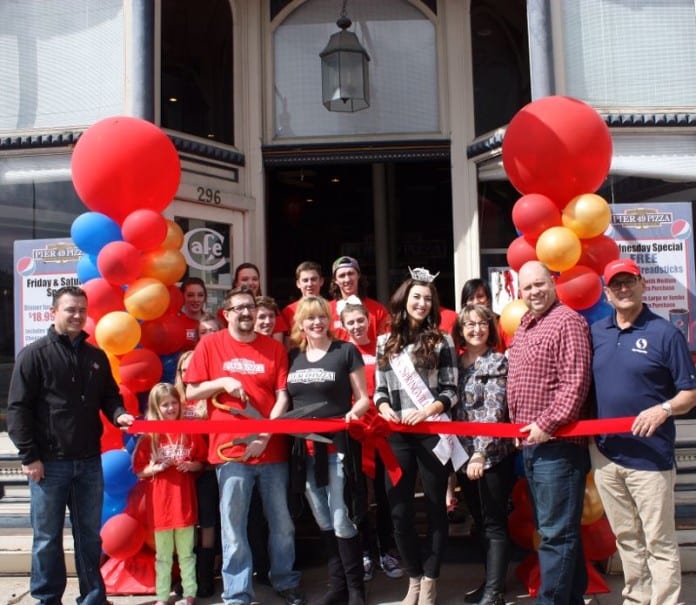 The Springville Chamber of Commerce welcomes the new owners of Pier 49 Pizza: Andy and Tannie Hjorth.rSpringville City has a rich history with love of the arts of every kind including paintings, theater and dance. If you ask Andy Hjorth, that art also includes food and more specifically pizza. Pier 49 has been open in Springville for more than 15 years, and Andy has wanted to own the location for years. Andy and his wife Tannie decided last year that they were ready to start a business that could be mostly run by family. Andy grew up in Springville and Tannie in Southern California. They met in high school after Tannie moved with her family to Springville. They have been married for almost 20 years and have five children.

Pier 49 Pizza’s specialty is a perfected sourdough crust that was created by Mike Dicou in the ’90s. Dicou is the owner of the Pier 49 Pizza brand. Springville is just one of the franchises along the Wasatch Front. Premium toppings and unique flavors create pizzas that are delicious and amazing. Each gourmet pizza has a San Francisco theme: The 49er (double pepperoni), The Alcatraz (classic combo), The Nob Hill (chicken garlic alfredo), The Ghirardelli (ham and pineapple with alfredo sauce) and Andy’s personal favorite – The Lombard (BBQ chicken).

As the new owners of Pier 49 Pizza of Springville, Andy and Tannie are creating a safe environment of fun and excitement where teenagers and families alike can gather for great pizza. There will be karaoke nights, family game/movie nights, paint nights, bands on the weekends and other events so residents won’t have to travel out of town for entertainment. A full-service salad bar is now offered as well a soft serve ice cream machine. Delivery is also available to Springville, Mapleton, north Spanish Fork and south Provo. They can be reached at 801-491-9111.