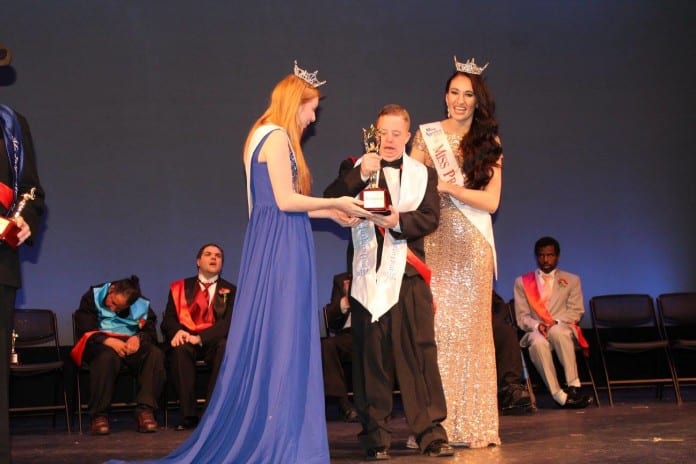 The 2016 Mr. Inspiration Pageant, held March 24, at the SCERA Center for the Arts in Orem, revealed the dreams and inspiring lives of local men with disabilities and surprised and inspired all who attended. The Mr. Inspiration Pageant honors and celebrates the lives of men with disabilities who inspire others while facing significant life challenges. The pageant featured 20 gentlemen with a variety of disabilities and life histories and gave them the opportunity to take center stage and inspire others in a fun, formal and classy competition.

Each gentleman and his volunteer sponsor prepared his “platform,” which was presented as a display at the event describing his interests, life story and dreams. Sponsors also shared what it is about each man that inspires them. Because many of the contestants cannot communicate through speech or demonstrate musical or other talents, pageant judges considered other criteria such as how the contestants have inspired others and how they present and pursue their dreams.

The five pageant judges are all current Utah royalty: Miss Orem, Miss Orem Outstanding Teen, Miss Provo, Miss Greater Salt Lake and Miss Pioneer Valley. Jesse Craig, Miss Orem 2015, has been a friend and a partner with Miss Inspiration for the last year. “I have had the privilege of working closely alongside TURN Community Services for the past year and can truly say that I’ve never seen an organization so committed to its clients,” Craig said. “Providing musical instruments, opportunities to serve, social events and the Mr. and Miss Inspiration Pageants all are just a few examples of the dedication of this family-like organization. Most importantly, TURN capitalizes on taking out the “dis” from “disabilities” and incorporates others – like myself – in this mission. I’m so grateful to my TURN family, and hope to be involved with them for many years to come!”

In March 2015, Miss Inspiration and her attendants were crowned, beginning a year of community service and fulfilling their role as advocates for people with disabilities throughout Utah. Mr. Inspiration and his four runners-up will now partner with cities, civic organizations and other royalty to celebrate life in Utah and promote the public image of persons with disabilities as capable and contributing neighbors and citizens.

TURN Community Services is a non-profit organization founded by parents in 1973 to create alternatives to institutions for their children and other family members with disabilities. TURN has since grown to serve more than 740 individuals in 11 Utah counties, offering a full range of residential, day, employment, summer camp, family support and respite services. In Utah County, TURN provides services to 170 people in 10 different programs including the successful TURN Community and Arts Center at 1620 N. Main in Spanish Fork. Also, stay tuned for the upcoming grand opening of TURN’s Art City Art Center near Reams at 655 E. 400 South in Springville. For more information about TURN, go to www.turndreams.org or contact Dave Hennessey at 801-343-3900 or davehennessey@turndreams.org.