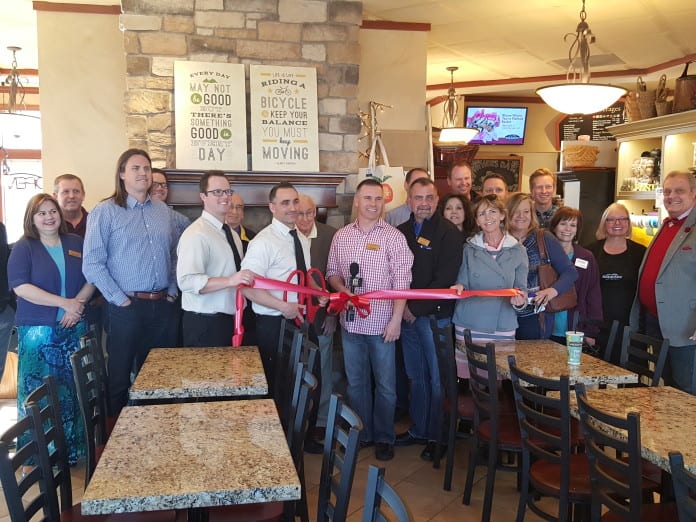 r Friday, April 1, represented the three-year anniversary of the Spanish Fork Kneaders opening in the city’s Canyon Creek business, retail, entertainment and office development. A ribbon cutting was held by the Spanish Fork Salem Area Chamber of Commerce recognizing this milestone as well as welcoming the business as a new member of the chamber. The event was attended by corporate leaders of the Fortune 500 chain, city leaders and elected officials as well as 30 chamber members and morning customers there for Kneaders famous French toast.rAnd in honor of the day, pieces of Kneaders famous cakes were shared with customers throughout the day. It was three years ago Kneaders was the pioneer in being almost alone in the opening of a development now filled with commerce and new businesses opening doors almost monthly.rThe Kneaders in Spanish Fork in 2015 was third in sales in a 50-property chain parent company based in American Fork known as Four Foods Group.rAt the April 1 event, Andrew Smith, CEO, was there for the celebration and paid tribute to the residents of Spanish Fork and the area for support of the restaurant and bakery property. He was also there to express his thanks to the store’s employees and manager/franchisee Ryan DuVall.

Kelly chosen as ALA elementary teacher of the month