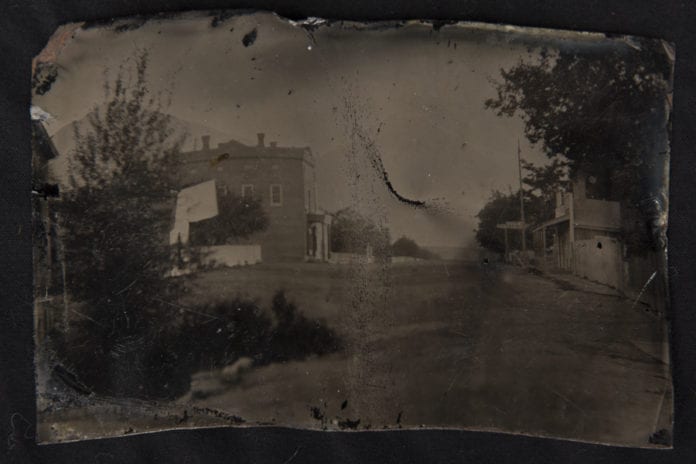 The best treasure hunts have interesting clues, and a hunt to learn more about Payson’s history is no exception. Through researching centuries-old photographic techniques, we can learn how Payson became what it is today.rPhoto A is a tintype, a photography technique that was very popular in the late 1800s. The Polaroid of its day, tintypes produced an actual image instead of a negative that then had to be printed out to be displayed. The photographer was able to send an image home with his client right when it was taken that was “printed” on tin instead of paper. This was a relatively affordable process, so many people of the day were able to memorialize things that were important to them.rTintypes, however, are reverse images, which meant that people appeared on the print as their mirrored reflection. Since today we’re used to seeing lifelike representations, these mirror images feel very off, but back then people really only saw their reflected visages. Of course, text in these images is also reversed.rKen Schuwer of Provo, who deals in rare pioneer-era photos, acquired Photo A, which is believed to be the earliest photo of Payson’s Main Street.

When Ken posted an image of the tintype on Facebook (the miracle of technology revealing the secrets of the past), I was thrilled. I shoot modern-day tintypes and restore old photographs, so seeing this image really got my blood pumping! I begged him to bring the image in to be restored, which started me on this treasure hunt of early Payson history. My new shop (The Photo Shop) is on historic Main Street in the old Skaggs General Store (also known as the old liquor store) and I’ve learned that the more time one spends in this historic area, the more important the town’s history and buildings become. So when this remarkable tintype depicting several early Payson buildings crossed our path, we knew the treasure hunt was really underway.rThe image had to be enhanced, enlarged and then reversed so we weren’t looking at a “backwards” picture. Once that was done, the words “La Belle Wagon Depot” could be discerned. A quick read of Payson history (I recommend “Peteetneet Town” by Madoline Dixon) reveals another interesting image with the same sign, as seen in Photo B.rWith this clue, we earn the first prize in our treasure hunt. The building pictured here is the William Douglass store, which became the Payson Cooperative. Next to it is the post office and to the left of that is the tin shop, likely the source for the very tin this image was made on.rCome back next week to see how the treasure revealed in this clue began to rewrite Payson history.

Steve Parsons lives in Payson with his family. He is attending the Academy of Art University and is slated to earn his master’s of arts degree in photography in 2016. He owns and operates The Photo Shop, located on Main Street in historic Payson, which offers quality fine art, photography lessons, custom photography sessions (specializing in landscape, aerial images and pet portraiture), photobooth rental and photographic editing/restoration and printing on a variety of surfaces. The Photo Shop also offers studio space for photographers to use. Parsons can be reached at 801-609-8039.