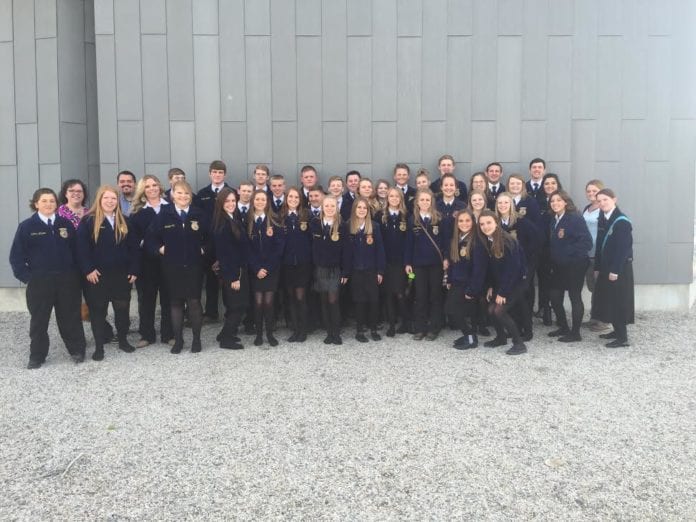 Students from the Spanish Fork High School FFA had the opportunity to show off their skills at the recent Career Development Competitions. Students competed in a variety of contests that help them learn skills directly related to future careers. Students competed in the following areas: Farm Business Management, Floriculture, Food Science, Horse Evaluation, Livestock Evaluation, Meats Evaluation, Milk Quality and Products, Nursey/Landscape and Poultry Evaluation.rCongratulations to the following students who excelled at the competitions.rThe Livestock team, consisting of Amanda Olsen, Britton Redd, Payton Redd, Mallory Sorensen and Stran Sorensen, was the third-place team at State CDEs. In addition, Britton Redd was named third-high individual. This team also was the winner of the Utah Invitation Contest with Stran Sorensen being named high individual, second place at the Deseret Peak Invitational, and third place at Snow College Judging.rChase Holt, Jessica Olsen, Porter Olsen and Brooke Sorensen made up the Poultry team. They were fifth place at the state competition. In addition, they were the third-place team at the Deseret Peak Invitational.rThe Floriculture team, made up of Kacie Jones, Lindsey Olsen, Tori Rucker and Kalli Unopulos, placed fifth at the state competition. They were also the second-place team at the Deseret Peak Invitational. Kacie Jones was named the high individual at the Utah Classic Invitational.rKendrie Barber, Randall Huff, Jackson Stewart and Kirsty Stubbs showed they know their meat when they were named the state champions of the Meats Evaluation Contest. Jackson Stewart was named high individual and Kirsty Stubbs was named second high. In addition, they were the winning team at the Deseret Peak Invitational and Jackson Stewart was high individual. The Meats Evaluation team will get the chance to represent Utah at the national convention.rStudents were also able to compete at the Utah State FFA Convention. Students were able to receive awards individually and as a chapter. Spanish Fork was recognized as a superior chapter. Kalley Stubbs represented our chapter in the creed competition and did a very good job. Brooke Voorhees was selected to be part of the first-ever state choir. Bailee Argyle, Jake Jones, Jorgen Olsen, Lindsey Olsen, Tori Rucker, Jackson Stewart and Kalli Unopulos received their State FFA Degrees.rProficiency awards allow students who excel in their Supervised Agriculture Experience to be awarded. Kaitlin Hallam was recognized for her work in Diversified Livestock Production. Tori Rucker was recognized for her work in Landscape Management. Kirsty Stubbs was recognized for her work with vegetable production. These girls will have their portfolios judged in June and, if chosen as a top-four winner, they will represent Utah at the National FFA Convention in October.