The pelicans are back 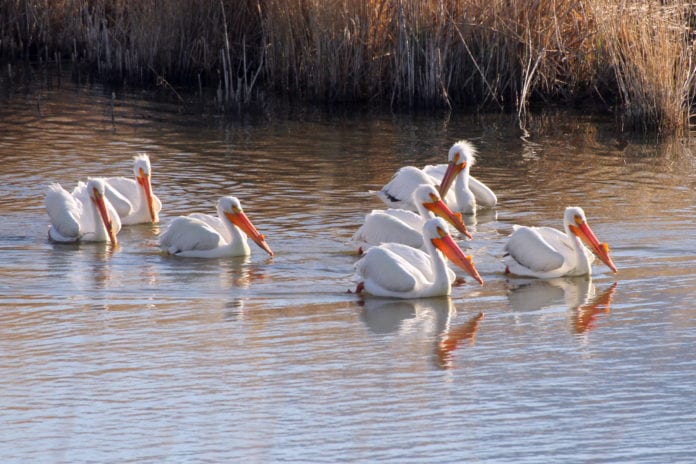 r My wife and I have noticed that the pelicans have returned to Utah Lake. They migrate south in the winter and can be seen in Utah waters starting in about April. They are large birds, which makes them easy to find and photograph with a reasonable telephoto lens.

Their feathers are all white except for the wing tips and underside of the outer wing, which are black and only visible when the pelican is in flight. They are actually noted to have the second-largest wingspan of any North American bird, exceeded only by the California Condor. The wing span of the American White Pelican is about eight to 10 feet. This long wingspan allows the pelican to soar very well, which helps their long distance migration.

The length of a pelican is about four and a half to six feet, which is contributed to by its long beak measuring 11 to 15 inches long. The body weight on adult birds is typically between 10 and 20 pounds. Despite their size, the internal structure of the bird allows the pelican to be remarkably buoyant in the water.

They arrive in groups of four to 12 birds and like to fish in groups. They are fascinating because they will cooperate and corral fish to one another. An adult pelican will eat more than four pounds of fish per day. The spring of the year, April through June, is breeding season. During this period, both the male and female have a very noticeable bump on the top of their large beaks. Notice that feature in the photo. After the breeding season, that growth is shed. The female will lay two or three eggs, and both parents share in incubating the eggs for about a month. The young leave the nest three to four weeks after hatching.

The American White Pelican is a beautiful bird, whether we see them swimming or in flight.

ALA March Teacher of the Month Brian Anderson