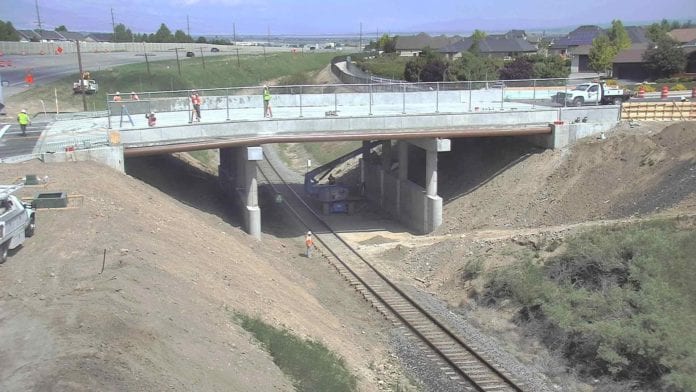 Have you ever tried riding your horse or driving your tractor over the train tracks and through a ravine? Early Spanish Fork settlers likely tried this on many occasions at the intersection of what is now Center Street and US-6. That is, until they built a wooden bridge, nicknamed the Cut-Bridge, to make it easier and safer for them to travel across this ravine.

As methods of travel evolved and travelers began using motorized vehicles, it became necessary to engineer an improved bridge that would support these new modes of transportation. A new bridge was constructed which could accommodate a mind-blowing two lanes of traffic at one time.

Good things tend to grow. Spanish Fork City must be good because it is growing. This growth required that the Cut-Bridge be renovated once again. Those who tried to use the bridge prior to the most recent renovation likely noticed that having only two lanes often led to congestion and did not leave adequate room for pedestrians to cross safely.

The improved bridge now has five lanes and an isolated sidewalk. Do you know how many lanes the Golden Gate Bridge has? Six. What does this mean for Spanish Fork City’s Cut-Bridge? It may become an American icon in the not so distant future!

Spanish Fork City is very grateful for the patience of citizens during this construction, especially the residents on the north side of US-6 that have been directly affected by this renovation. We hope you enjoy this new landmark.

Publisher’s note: If  you have any old photos of the cut bridge from its early days please submit at www.servedaily.com/submit/article. Thanks.