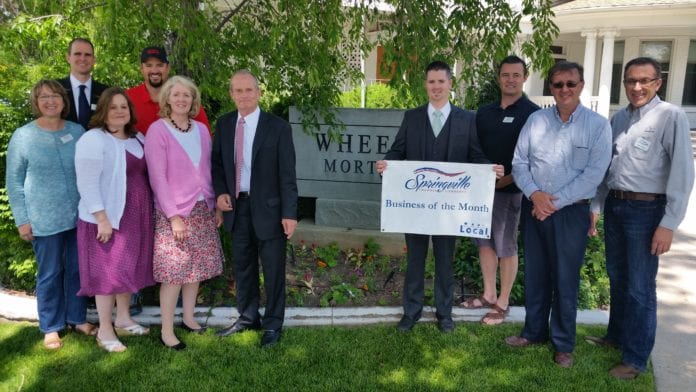 The Springville Chamber of Commerce has chosen Wheeler Mortuary as its Business of the Month for June.

Wheeler Mortuary has been family owned and operated for more than 127 years and by five generations. Upon the death of Walter Wheeler in 1921, Walter’s son Alma Young “A.Y.” took over the business and rented the mortuary’s first facility. In 1923, Wheeler Mortuary was built at 355 E. 200 South in Springville. It wasn’t until 1940 that the mortuary moved to its current location at 211 E. 200 South.rWalter Wheeler was the founder in 1888. While working in the stone mason industry with his father-in-law Thomas Child, Walter was injured and unable to continue in that field. As a good friend of William Henry Taylor, the predominate undertaker in Salt Lake City, Walter served an apprenticeship and learned the trade. In 1903, a law was passed that required licensing for embalmers. Walter attended the Myers College for Embalming and earned his certificate and was the first licensed embalmer in the state.rA.Y. passed away in 1957 and his son Blaine took over the family business. Blaine and his wife Melba worked very hard during this time, dedicating their lives to the service of others.rBlaine’s son Paul attended Cypress College in 1980 and, as a fourth-generation owner, he took over the business in 1986. Blaine passed away in 1992.rPaul’s son Nicholas attended Worsham College in Chicago and he is currently employed full-time as a director for Wheeler Mortuary. He will become the fifth generation owner upon Paul’s retirement.rTo better serve families in Mapleton, the mortuary added a facility there in 2004.rThrough all the changes over the years, one thing that has not changed is their dedication and personalized service to every family they have the privilege to work with.