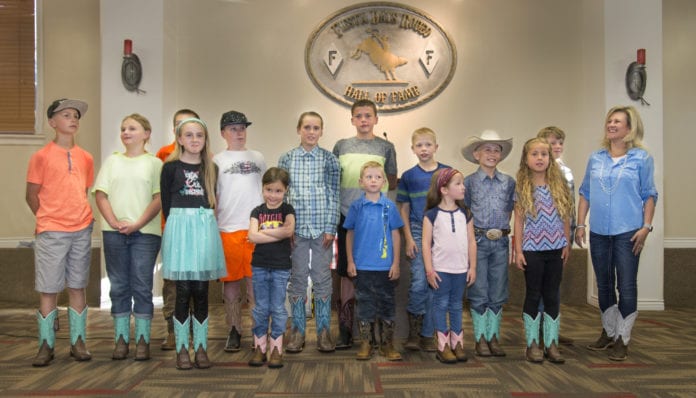 r It started with one teacher issuing a simple challenge to her class to read more western novels. Now it is a city wide effort to encourage reading and introduce the rodeo to a younger generation. Members of the Rodeo Committee visited local schools and conducted eighteen assemblies in only five days. Students were asked to track their reading minutes for the month of March. The students who read the most minutes in each class at each school were then entered in a drawing.

The winners of these drawings were invited to the High Chaparral building at the Spanish Fork fairgrounds on June 3, 2016. After dinner and introductions, the students were called forward to receive their reward, a pair of Justin Boots and tickets to the 2016 Wrangler Champion Challenge Rodeo where they will be introduced as part the opening ceremonies.rIn its third year the program has increased in both popularity and success. The impressive accomplishments from the previous years have been surpassed and the reading totals are a truly impressive feat. In total the elementary schools reported an amazing 2,388,702 minutes.rBrockbank Elementary is represented by winners Cahill Simons and EllyAnn Thacker. Aubrey Ashliman and Dashiel Fife were chosen from Canyon Elementary and Shyloh Grosland and Shanae Orton from Larsen Elementary. Park Elementary selected Jordan Jensen and Kyler Hoover as winners. Andy Herget and Grayden Hunter were chosen from Rees Elementary. Riverview Elementary selected students Alyssa Gorham and Caleb Giles. Winners Sara Christensen and Dallin Hardy attend Sierra Bonita Elementary. Spanish Oaks Elementary is represented by winners Lydia Adams and Derek Ford. East Meadows Elementary students Samuel Frederick and Luke Rasmussen won their drawing. Student Aubrey Ashliman was particularly excited. She had been struggling with reading and was falling behind. Encouraged by the program Aubrey was able to increase her reading minutes and catch up to her grade level goals. She fondly recalled the day she won the school drawing, “I was so happy! I had a big smile on my face.”rRecognized for their support of, donation to, or participation in this phenomenal program were many important guests. The members of the Rodeo committee alongside City Council members Chad Argyle, Stacy Beck and Keir Scoubes joined by Mayor Steve Leifson met with and congratulated the students. The prized boots, donated by Justin Boots, were proudly presented by representatives Tom Feller and Mike Haderty. The PRCA Administration as well as PRCA announcer Randy Corley attended the dinner along with Wrangler Jeans representative Robert Leiber. The impressive line of well-wishers and congratulators also included stock contractors Hank Franzen and Craig Wentz, Barrelman and Clown Gizmo McCracken and Janice, and Bullfighters Joe Butler and Richie Harris.