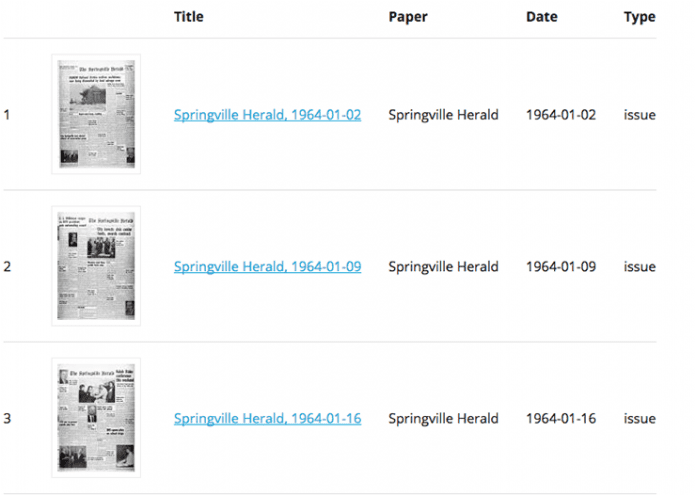 Possibly the greatest historical treasures to be found in the document collection of the Springville Historical Society are the volumes of The Springville Herald that were donated by the publisher during the many years the newspaper informed the citizens of that community of local happenings and the people involved. The collection includes annual volumes from 1924 until publication ceased in the earlier years of the current century.

rThe Springville Historical Society is currently in the process of having the newspapers digitized and made available to the public at digitalnewspapers.org. Through cooperation with Springville City, the Springville Public Library and the Utah State Historical Records Advisory Board, grants have been acquired to help bring this project to reality. Currently digitized copies are available online at the before mentioned website for the years between 1924 through 1963, with 1964 through 1969 in the process of being added. A debt is owed to Chris Baird and Serve Daily for continuing the preservation of local history and making archived copies available online. Social media is a tremendous means of what used to be called “spot reporting,” but nothing can replace a printed newspaper as a way of preserving local history. Long live the printing press!

rProgress in completing the digitization of the remaining volumes of The Springville Herald will be reported here in the future with more details on how to search and access the articles.