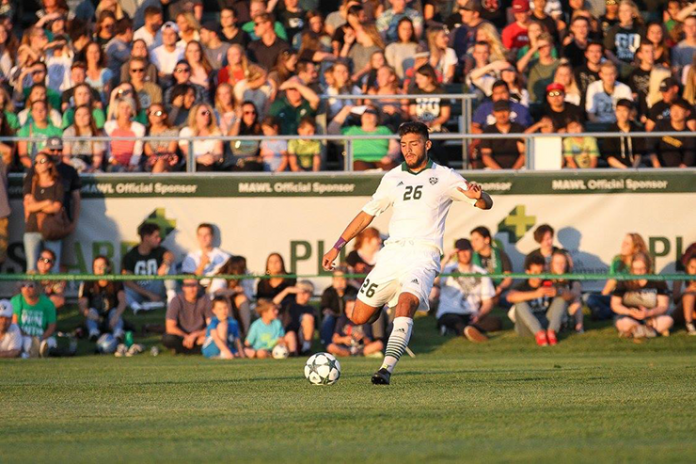 r By Nate MathisrrNo. 24 Utah Valley University got a brace from Paul Hoffmeister to secure a 2-1 win over No. 20 Washington in front of 3,216 fans in the 2016 season opener on Friday night at Clyde Field.

Hoffmeister scored in the 14th minute and then registered the game-winner in the 55th minute for the junior’s first career brace. The Wolverines (1-0-0) held off a barrage of attempts by the Huskies (0-1-0) over the final 40 plus minutes, playing a man down following a red card.

“We knew this was going to be an incredible opening match and it certainly didn’t disappoint,” said UVU head coach Greg Maas. “For Paul to get that goal early in the second half was unbelievable especially after going down a man with 40 minutes to play. It was an incredible gut check for our guys. Washington’s an incredibly talented and experienced team and they put a lot of pressure on us.”

Hoffmeister’s first goal came on a counter attack with Gui Leme initiating the action up the middle of the field. Leme connected with Karson Payton to his right just past midfield before Payton led Hoffmeister, who scored with his left foot just inside the 18 and through the legs of the goalkeeper.

“This game was just awesome. The intensity was high and the fans were fantastic and they really pushed us when we were a man down,” Hoffmeister said.

Washington tied it less than three minutes later on a penalty kick by Steven Wright. The score remained 1-1 until after the half.

Just six minutes into the second half, Payton was received his second card and the Wolverines were forced to play a man down the remainder of the way.

Despite that, UVU was able to get the game-winner from Hoffmeister five minutes later. Leme served the ball into the box and, after the goalkeeper was unable to secure the ball, Hoffmeister put himself in position for the loose ball and the game-winner.

Utah Valley survived a barrage of late chances from Washington, which had 10 of its 18 shots and 11 of 15 corner kicks in the second half. New goalkeeper Elliott Rubio had five saves including a pair of crucial saves down the stretch.

The Wolverines hit the road next week for a pair of games at Bradley University. UVU will face Evansville next Friday before facing host Bradley on Sunday, Sept. 4.

Nominations now being accepted for The Altus Award