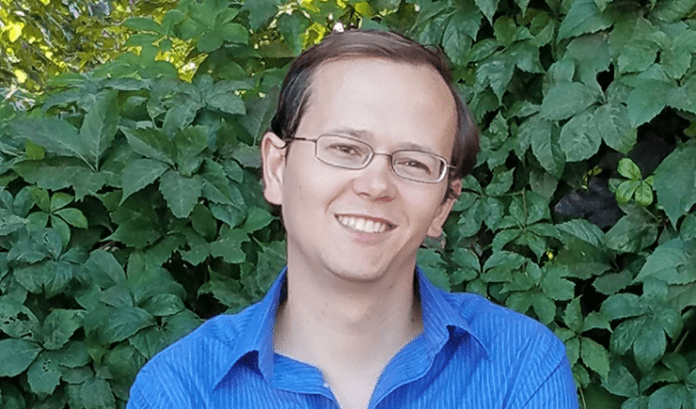 r By Carmen BartolorOrem resident, Dustin Steinacker, has been officially announced as a winner in the Writers of the Future Contest. The contest, one of the most prestigious writing competitions, is in its 33rd year and is judged by some of the premier names in speculative fiction.rMr. Steinacker’s winning short story has earned him a cash prize, a trip to Hollywood for a week long intensive workshop, a gala awards ceremony which draws in excess of one thousand attendees as well as a shot at winning the Golden Pen Award and $5,000 cash prize. His story will be published in the annual bestseller, L. Ron Hubbard Presents Writers of the Future Volume 33.rDustin received his MPA from BYU last year and lives in Orem, with his wife, Helena, and their goofball dog Caramel. He’s currently revising his debut novel, a New Weird colonial fantasy. Writers of the Future is his first sale.rThe Writers of the Future Contest judges include, Tim Powers, author of On Stranger Tides, Kevin J. Anderson and Brian Herbert, Dune, Robert J. Sawyer Flash Forward, Robert Silverberg, Sailing to Byzantium, Larry Niven and Jerry Pournelle, A Mote in God’s Eye, Orson Scott Card, Ender’s Game, and Nnedi Okorafor, Who Fears Death, to name a few.rFollowing the 1982 release of his internationally acclaimed bestselling science fiction novel, Battlefield Earth, written in celebration of 50 years as a professional writer, and recently released in as a bestselling 21st Century trade paperback and audiobook, L. Ron Hubbard created The Writers of the Future writing contest (www.writersofthefuture.com) in 1983 to provide a means for aspiring writers of speculative fiction to get that much-needed break. Due to the success of the Writing Contest, the companion Illustrators of the Future Contest was created in 1988.rThe intensive mentoring process has proven very successful. The 380 past winners of the Writing Contest have published 838 novels and nearly 4,000 short stories. They have produced 27 New York Times bestsellers and their works have sold over 50 million copies.rThe 310 past winners of the Illustrating Contest have produced over 4,500 illustrations, 356 comic books, graced 594 books and albums with their art and visually contributed to 36 TV shows and 46 major movies.rHundreds of winners have had successful writing careers following their win and publication in the anthology, and to date has launched the careers of 12 New York Times best selling authors including:rJo Beverley, Tobias S. Buckell, Nancy Farmer, Eric Flint, Karen Joy Fowler, Tim Myers, Patrick Rothfuss, Lisa Smedmen, Dean Wesley Smith, Elizabeth Wein, Sean Williams, and Dave Wolverton aka David Farland.rFor contest information: www.WritersOfTheFuture.com