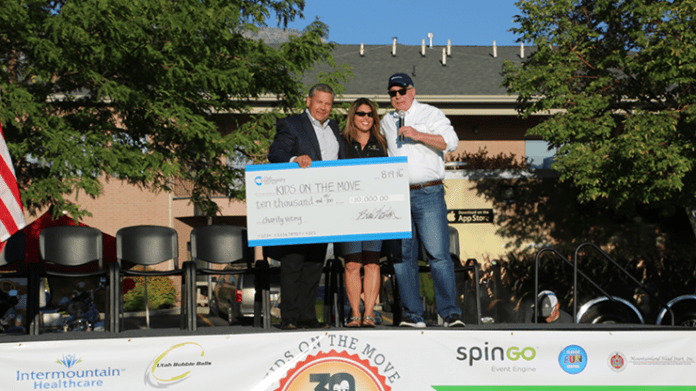 As part of the UCCU’s 60th Anniversary Celebration, $30,000 was donated to the top three finishers in the Charity Voting contest.

“The community response to our 60th anniversary charity giveback voting campaign was amazing,” said Brad Norton, SVP Marketing for UCCU. “The voting results for first place were so close that we decided to award each of the top three charities with first place honors and a $10,000 donation.”

The community was invited to vote for their favorite charity from a list of local Utah-based organizations identified through the help of the United Way of Utah County. After tabulating the results, Primary Children’s Hospital finished in first place with 8,048 votes, Kids On The Move finished in second place with 7,956 votes, and Family Support and Treatment Center finished in third place with 7,645. The remaining charities will each receive $1,000 for their participation in UCCU Charity Voting contest.

Utah Community Credit Union is a leading provider of financial services and a long-time supporter of local organizations and giving back to the community.

Utah Community Credit Union has been a part of this community for 60 years and from its BYU beginnings was founded as a not-for-profit financial institution owned by its members and based on the industry principle of “people helping people.” With over $1 billion dollars in assets and 130,000 members, UCCU is celebrating its 60th anniversary in 2016.

Founded in 1956, Utah Community Credit Union is a not-for-profit financial institution rooted in the credit union philosophy of “people helping people” and built on a commitment to outstanding service, respect for others, and fiscal responsibility. With the highest standards of honesty, professionalism, and integrity UCCU is committed to achieving excellence in operations, products, and member service.