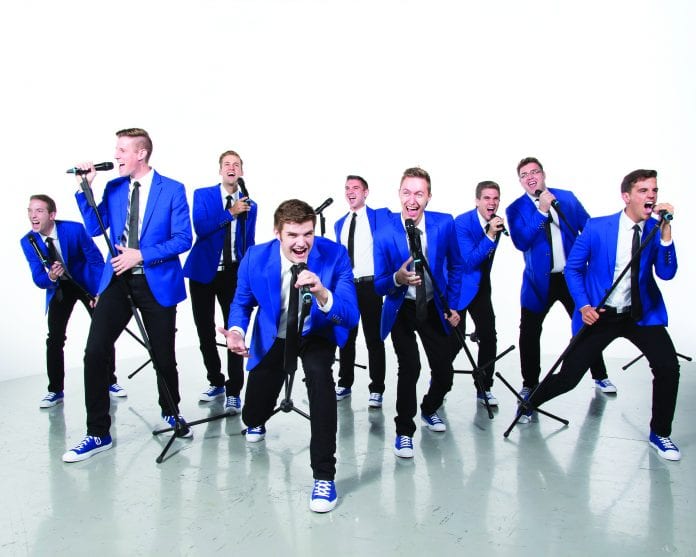 r The Spanish Fork Arts Council is once again pleased to present the Harvest Moon Hurrah – now in its 12th year! This free community event for the entire family will be held Saturday, Sept. 17, at the City Park, located on the corner of Center and Main streets, from 3 to 9 p.m.

In keeping with the event’s tradition of outstanding entertainment – which in the past has included entertainers such as The Piano Guys, Eclipse, Lindsey Stirling and The National Parks – this year Brigham Young University’s Vocal Point will be the Hurrah’s featured performer.

The event will also welcome back the wildly popular Green Man Group from Utah Valley University and other local favorites such as the American Leadership Academy Show Choirs, juggling storyteller Drew Briney, the Spanish Fork Chorale and the Nebo Philharmonic Orchestra. Also performing will be three new and talented performing groups: Sailing Paper Boats, Whitney Lusk and Andrew Wiscombe. Entertainment will run from 4 to 9 p.m.

Beginning at 3 p.m. will be the children’s crafts and games in the large tent and the giant paint-it-yourself murals. At 4 p.m., pumpkin decorating, clowns and balloon animals, storytelling and caricature illustrations will begin. At 5 p.m., the hay rides with live bluegrass music will begin. The activities will wrap up between 6 and 7 p.m. so that everyone can enjoy the featured entertainers.

There will also be food vendors and food trucks serving up delicious food at family-friendly prices.

Sponsors from the local community include Macey’s and Creative Signs & Graphics. For more information, visit www.spanishfork.org.

Nationally renowned a cappella group Vocal Point gives stunning, high-energy performances that won them the International Championship of Collegiate A Cappella and a faithful following throughout the world. The group competed on NBC’s “The Sing-Off” in 2011. Each week, Vocal Point and other a cappella groups performed and were judged by recording artists Ben Folds, Sara Bareilles and Shawn Stockman. Vocal Point finished as one of the top five final groups on this nationally televised competition.

With a varied repertoire and a wide range of vocal possibilities – and seeming impossibilities – these crowd-pleasers have it all: rock, pop, country, jazz, and R&B all mixed into the time of your life. This nine-man group takes the songs you hear on the radio, retools them and delivers a new rendition, complete with all the complex instrumentation, done entirely with their mouths. Their family-friendly show is a toe-tapper and their performance is a showstopper. Each Vocal Point member displays musical ability, creativity and stage experience – a combination which adds up to original, skillful and spirited performances.

UVU’s Green Man Group was founded in 2010 and has grown into a university hit as they entertain and enliven the atmosphere of UVU sporting events.