Dating photos by type and clothing 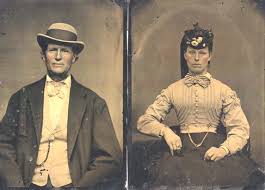 r Do you have photos that aren’t labeled or dated and you are trying to guess when the pictures were actually taken and who is in them? Determining the type of photo and knowing about clothing styles and hairdos of the time will help narrow down the time period so you can possibly identify the people.

First, determine the type of photo you have. Ambrotypes are on a glass plate and have depth similar to a 3D look. They were most popular from 1855 to 1861 but were available from 1854 to 1865. The Daguerrotype was the first imaging available, coming into vogue in 1839 and stopping about 1860 with peak popularity between 1842 and 1856. They are shiny with a copper colored back and the image can only be viewed from an angle. The Tintype was first available in 1856 but continued through the early 20th century as a novelty available at fairs and expositions. It was most used from 1860 to 1870. A blackened iron plate was the medium and a magnet will stick to it. The last two types of photos are the Carte de Visite and the Cabinet Card. The former is on a thin card about 2.5 inches by 4 inches which was introduced in 1859 and was prevalent from 1860 to 1880, declining in use by 1889. The Cabinet Card was fashionable from 1875 to 1900 and was launched in 1866 and discontinued by 1903. These photos were on cards about 4 inches by 6.5 inches.

Next, note the clothing and hairstyles of the subjects. Is there a central part in the hair or a shiny look to it? Are the skirts full and the collars a different color than the bodice? Many excellent articles have been written on determining dates from the subject’s costume. The following are some of the best: http://www.olivetreegenealogy.com/photos/fashions-photos.shtml and http://www.fashion-era.com/Dating_Costume_History_Pictures/how_to_date_photographs_top.htm and http://www.sheknows.com/living/articles/814584/genealogy-research-dating-vintage-photographs-by-clothing-and-hairstyles-1.

On a personal note, I have again been selected as a RootsTech Ambassador and have been given the opportunity to give away a full tuition for the RootsTech Family History Conference, the largest family history conference in the world, taking place on Feb. 8-11, 2017, at the Salt Palace. If you are interested, send me an email at groovifamily@msn.com with “RootsTech Free Tuition” in the subject line and include your contact information. The prize will be drawn on Nov. 15 and the winner will be notified that day.

Human remains identified as those of missing woman