Kids Cause honors dentist partners at Nebo school board meeting 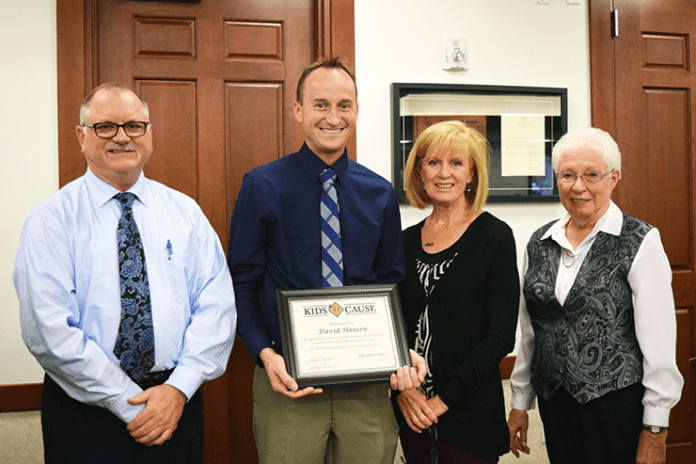 r Bonnie Palmer, Patricia Palmer and Ron Firmage, all board members of Kids Cause, honored two dentists that truly make a difference in the lives of Nebo School District students during a recent district school board meeting.

Kids Cause was organized 20 years ago for the purpose of providing clothing, medical treatment, vision care, dental care, school supplies and other items that will contribute to the well-being of public school students who are not served by any other community, state or national agency. Ron Firmage is the executive director of Woodland Peaks UniServ. The Kids Cause board members for Nebo District are Kaye Westwood, Payson/South area; Patricia Palmer, Spanish Fork/Salem area; and Bonnie Palmer, Springville/Mapleton area.

Palmer recognized Dr. David Hansen with Woodland Dental. Hansen received his Doctor of Dental Medicine degree from the University of Kentucky College of Dentistry. Dr. Hansen has earned awards of excellence in both academic and clinical dentistry. He is a member of the American Dental Association, the Utah Dental Association and the Provo Dental Society. Dr. Hansen is dedicated to excellence in his field and attends continuing education courses frequently to stay on the cutting edge of dentistry.

Dr. Hansen grew up in Salem and loves the area and the people. He is married to Alyse Orton, also from Salem. They have four children: Adeline, Ashton, Eli and Olivia.rOutside of dentistry, he enjoys watching BYU sports, horseback riding, camping and spending time with his family.

Palmer also recognized Dr. Benjamin Hulse with Salem Smiles Dentistry. Dr. Hulse grew up with six brothers and five sisters in various states across the country. This nomadic lifestyle continued after high school when he served an LDS mission in Honduras. Apart from the wealth of life experience this brought, it also enabled him to speak fluent Spanish. Dr. Hulse was a graduate and valedictorian of Utah Valley University’s class of 2002. He pursued and received his Doctor of Dental Surgery degree from the University of Iowa in 2006. Dr. Hulse came to Salem after ha01ving served in the U.S. Army as a dental captain. During his time in the military, Dr. Hulse was responsible for the deploying preparedness and reintegration of U.S. soldiers stationed in Europe before they left or came back from Iraq and Afghanistan. He was a member of the unit responsible for hospital dentistry at Landstulhl Regional Medical Center, the biggest military hospital outside of the U.S.

After his military service, Dr. Hulse moved to Cookville, Tenn., where he opened his own private practice. Though his family truly loved their Tennessee experience, they grew homesick and decided to return to south Utah County where most of his wife’s family is located. Dr. Hulse married his high school sweetheart, Heather, and they reside in Spanish Fork with their five children: Jaci, Bastion, Xander, Tessa and Quinn.

One specific activity that Kids Cause coordinates is the annual Shop With a Cop Event in December. Together with K-Mart in Spanish Fork and Utah County police officers, more than 100 8- and 9-year-olds are taken to breakfast, ride through the Festival of Lights in a police car, shop with a police officer and choose gifts for their family members and themselves. Their gifts are then wrapped and tagged and sent home to put under the Christmas tree.

Kids Cause board members thanked Nebo district for the use of the Diamond Fork Junior High School for its annual breakfast each year.