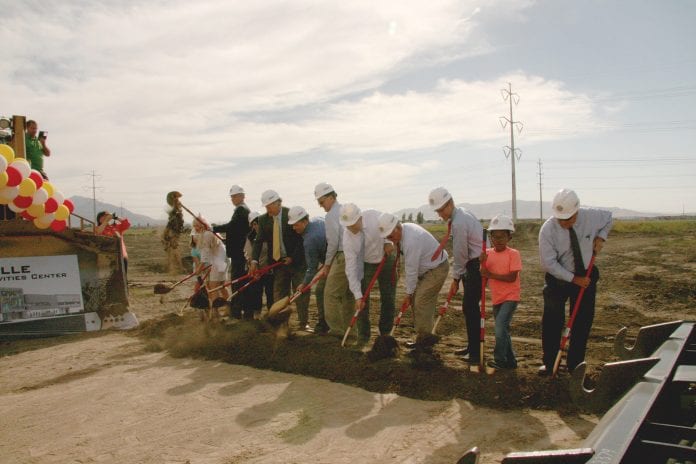 “We’re just very happy that we can get this built in Springville,” said Springville City Councilman Chris Creer to the crowd during the groundbreaking ceremony. “It’s a long time coming.”

The center will be built in an area at 1200 West and 700 South that is now open fields. It will be located next to the recently completed Meadow Brook Elementary School and the new Smith’s Marketplace that is currently under construction.

The aquatic center will replace the current Springville city pool, which is more than 40 years old. Completion of the new center is expected by the end of 2017 or early 2018.

Springville Mayor Wilford W. Clyde said in his address during the ceremony that seven years ago, when he asked his wife what she thought about him running for mayor, she asked him to concentrate on two issues: economic development and building a recreation center in Springville.

He had originally planned to serve only one four-year term as mayor, but achieving both these goals took longer than anticipated, Clyde said. Economic development took longer than expected because he took office during an economic recession.

With more businesses now coming to town – Clyde hinted that there would be some announcements soon – and the aquatic center underway, he said he has fulfilled his wife’s requests. “I will be done next year,” he said.

Springville voters approved an $11 million bond issue in November 2015 to fund construction of the Springville Aquatic Center. At the time, preliminary plans indicated the total cost of the center would be $18 million. Nebo School District will contribute money toward building the aquatic center project as students from the district’s high schools will use the facility for swim team practices and activities. The remaining funding will come from other sources.

The city has spent the time since the bond issue vote working with architects to design the center.r“We’ve tried to build the best facility we can and stay within the budget that the citizens have given us,” Clyde said.

The aquatic center will include a multi-use pool with swimming lanes, a recreation pool with a current channel, a toddler pool, a spa and a splash-down pool with two water slides. Also included in the design is a gymnasium, a workout area, a walking track, several program rooms and a day care center.

Travis Pope, a 2013 graduate of Springville High School who participated in the aquatic center groundbreaking, swam with both the Springville Seals and SHS swim teams. Having access to a pool and participating on these teams changed his life, he said, and helped him learn important life lessons.

He said he is happy that a pool will continue to be available to local students. “I’m excited for any kid that comes along that has the same opportunities I did,” Pope said, who now serves as assistant coach of the SHS swim team.

According to the Springville City website, every effort will be made to keep the old city pool open until the new one is completed. The old pool is located just west of Springville High School, and there are no plans yet for the property.