‘The Addams Family’ musical comes to ALA 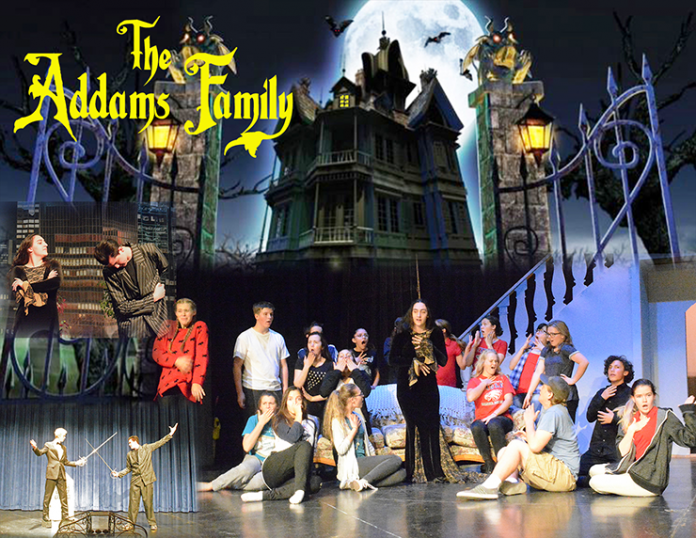 r By Elaine Hansen and Larry BlackburnrIt has taken more than two years to obtain the much-sought-after license to produce “The Addams Family” on the high school stage. It has finally been done and it is coming to American Leadership Academy in Spanish Fork Oct. 21 through 29 under the direction of Elaine Hansen and Larry Blackburn.r”The Addams Family” is an adaptation of the quirky characters from the comic strip by Charles Addams and later the television series from the ’60s. Now Andrew Lippa (composer and lyricist of “You’re a Good Man Charlie Brown”) has outdone himself with very danceable and traditional Broadway-style music and lyrics for the funny and loveable family of Gomez Addams.rIt’s the perfect Halloween treat for all. They’re creepy and they’re kooky, mysterious and spooky!

As the curtain rises, the Addams family is celebrating a ritual for their dead ancestors who emerge from their graves. Uncle Fester enlists their help to deal with Wednesday Addams who is now a grown up woman in love. What’s more, the boyfriend and his parents are coming to dinner to meet the family. Two different worlds are about to collide!

The ALA version of the musical features more than 90 students as cast and techies.rRecently nominated in Los Angeles for the World Choreography Awards, our choreographer Jason Celaya has created amazing dances throughout the show. Costumes have once again been produced by Sherry McKellar and volunteer seamstresses. Assistance direction has been provided by Kelly Carter, a parent with a long personal history in musical theater.rLarry Blackburn has worked tirelessly, as have Elaine Hansen and assistant director Kelly Carter, to a make sure the staging, props, music and sound and lighting will be to the highest standard.rHighlights to watch for include: Lurch (elevated), Moon Dancers and the clever work of Rick Josephson with Cousin It and Thing and Fluffy the Alligator who lives in the moat. If you are adverse to cemeteries, pet rats, chess, and games of Full Disclosure, then this is not a musical to see. But if you like crossbows, monsters under the bed, potions made in the attic and yellow and black clothing, you will love this show and “die” laughing.rTickets are $8 for adults and $6 for children. They can be purchased by calling 801-794-2226 ext. 4.