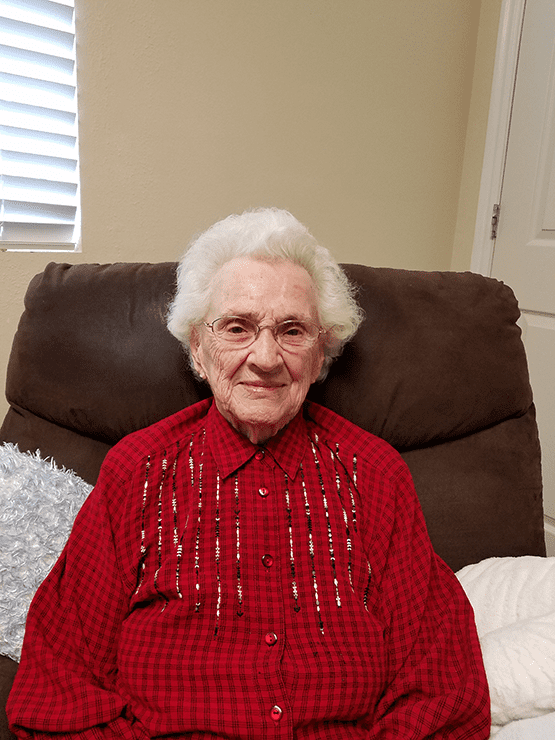 Every community has people in it that make it great. I’m talking about salt-of-the-earth kind of people. Join us as each month as we highlight one of our longtime members in the community.rNellie Kunz was born in March of 1920 in her parents’ home located in Granite, Utah. Charles and Elise Despain raised Nellie, her sister and her four brothers in Granite. Charles worked at the granite quarry up Little Cottonwood Canyon at a very young age helping with the construction of the Salt Lake City Temple. He worked at the mine up until the completion of the temple in 1893, then began mining in Alta and opened the only store in the area with his brother.r“My father used to tell us a story about a man working at the quarry,” Nellie said. “One day while splitting some quartz, a large slab sheared unexpectedly, falling on the man. When the crew tried to lift the slab to set him free, he told them to stop moving the slab and to bring his family to the quarry. Someone quickly went to Sandy City to retrieve the miner’s family. When they returned, all his wife and children rushed to his side. The trapped man proceeded to give each child and his wife a blessing. He then allowed the crew to lift the massive quartz slab off his crushed body. Within just a few minutes he died.” Nellie’s father used to tell the kids that story to remind them of how precious life is and make sure your house is in order.rNellie married Evert A. Kunz in 1940. He was from Sandy but attended the same grade school as Nellie. He was a couple of grades ahead of her. She never noticed him much until she finished high school. They dated from February to August and were married. They would live in Granite for several years. Evert worked at ZCMI in the shipment department. He would later work for Farmers Insurance for many years. Nellie and Evert had five children: JoAn, Lael, Robert, Lyle and RaNel. After Evert passed away, Nellie took care of her eldest daughter JoAn who had MS. After several years, and as her MS advanced, RaNel convinced Nellie to move to Payson to be closer to her so she could help with JoAn’s care.

“We had been looking for a suitable home for weeks and could not find something that was a good fit for JoAn and I,” Nellie said. “RaNel was helping me by looking around for homes in the area. One day she called me and said a home just came on the market that she was in love with. RaNel went to the sellers and told them not to show the home to anyone until her mother could see it. I quickly got JoAn and myself ready and drove as fast as I dared to Payson. The home was very nice, almost perfect. There was an opening that was difficult for JoAn to navigate her power chair through, and the seller agreed to remodel it so it would accommodate JoAn. We purchased the home and moved to Payson in 1994,” said Nellie.rAfter JoAn passed away, Nellie spent most of her time at the Provo temple, working there for eight years. Nellie recently moved into Beehive Homes of Payson. “I enjoy it here so much, I have great friends, I’m not homesick at all,” she said. Nellie has 22 grandchildren, 60 great-grandchildren and six great-great-grandchildren (with two on the way). She has an amazing posterity. “I am so blessed, my children all get along so well, they find excuses to get together. I love them so very much,” Nellie said.rThank you Nellie Kunz for being kind, loving and generous and making our community great. We recognize you for the great family you have raised and serving our community in every way you can to make life enjoyable for those around you. To contact Nellie Kunz, visit or write her at Beehive Homes of Payson, 661 E. 700 South, Payson, UT 84651.

Achiever Preschool selected as June Business of the Month