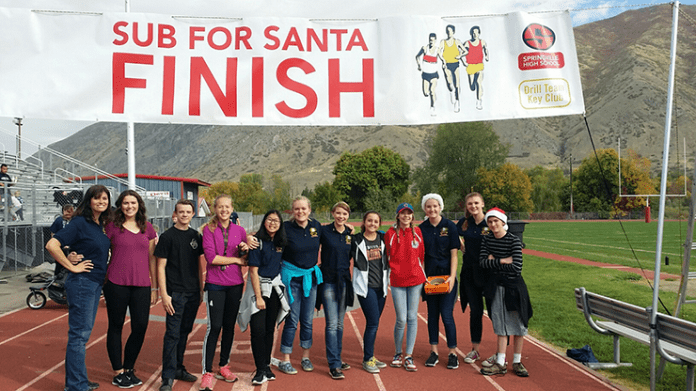 r On Oct. 15, Springville High School was the scene of the fourth annual Sub for Santa 5K Run sponsored by the Kiwanis Club of Springville. More than 160 runners and walkers ranging in age from 7 to 75 gathered in the crisp morning air at the starting line in the stadium. Adding to the crowd were another 25 volunteers from the high school’s Key Club, the Kiwanis Club and their families.

Mike LeFevre, newly installed president of Kiwanis Club of Springville, said, “This is an annual race that is put on for the children of Springville. We had over 160 runners that took to the course this year. This was double what we had last year. Lots of local businesses donated funds and dozens of prizes to the project. All of the money that was raised went back to the local elementary schools to help fund projects that will benefit all of the children of Springville.”

An important feature of the race is the partnering with elementary school PTAs to both raise funds and benefit children selected by their respective schools. First, all the race fees attributable to a runner’s school are given back to that PTA to benefit school programs. Second, if a school enters at least 50 runners, then that school can choose one child to receive an orthodontic “scholarship.” Three elementary schools entered more than 50 runners each: Reagan, Sage Creek and Mapleton. The scholarships are donated by Warren Orthodontics, 688 W. 400 South, Springville.

Medals were given to the winners of the different age groups. In addition, more than 85 race prizes donated by local merchants were given out to the participants in a drawing at the end of the race.

Kiwanis Club of Springville (Links to Facebook page) was chartered in 1921 and has been serving the children, youth and families of Springville continuously for 96 years. Kiwanis is an international organization that helps humanitarian efforts throughout the world.

Because of the generous support of Springville’s private and corporate citizens, Kiwanis Club of Springville is able to sponsor the following local projects:r– Springville’s Sub for Santa programs, which in 2015 saw Springville neighbors volunteer 1,500 hours of service to deliver more than 12 tons of donated food to local families in need and Walmart gift cards to 725 children in Springville.r– The Art City Days Children’s Art Festival involving more than 3,000 children in 2015.r– The Springville High School Key Club consisting of almost 100 students actively engaged in serving the school and community.r– Scholarship programs to recognize the contribution of local students to the community.r– Springville Community Cub Pack and Scout Troop 1456, a non-denominational Boy Scouts of America pack and troopr– The local Head Start Reading Program 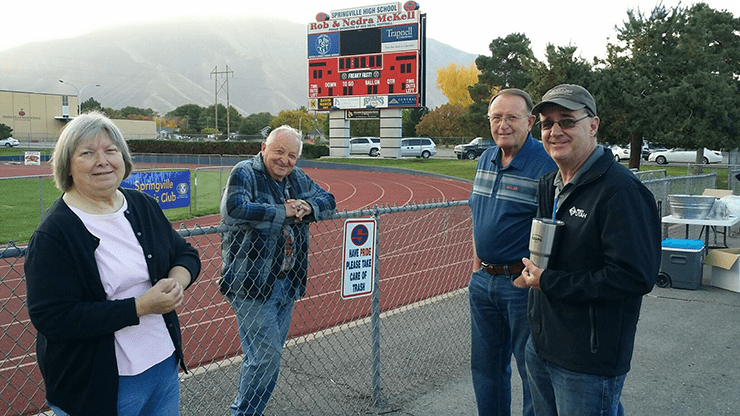