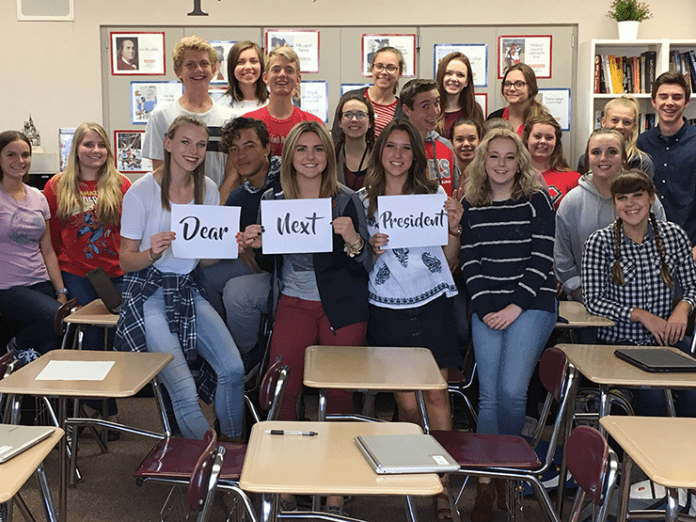 r As Americans were preparing to elect a new president in November, AP English Language and Composition students at Spanish Fork High School were tackling important issues with a writing project called Letters to the Next President 2.0. This project allowed the students, and others around the country, to write letters about what really mattered to them in the election. The letters were to be delivered to the next president and published on a website. Most students cannot vote, but they were very aware of the election and the issues that mattered to them as they look toward adulthood. Even though they couldn’t cast a ballot, they could tell the next president exactly what they thought through this project.

AP Language students at SFHS chose a variety of topics to write about – everything from the cost of higher education to minimum wage, abortion and beyond. About the necessity of using GMOs to end world hunger, Mateen Lomax wrote, “Genetically Modified Organisms (GMOs) are given much more hate than they should. GMOs can solve many problems that face our society, without causing any more harm.” Colby Roberts wrote about the need for the rising generation to have a direct voice in government. He argued for a Constitutional amendment lowering the age requirement to run for national office to 18. Megan Kay asserted, “Putting taxes on sugary products and drinks could be the solution to decreasing obesity and consumption rates nationwide.” These students spent several weeks developing their letters through research and discussion.

Check out Letters to the Next President at www.letters2president.org. The site will be available for the public to read the students’ letters through the inauguration in January.

Thoughts on Zion: Have we left Babylon behind?