Dickerson Automotive a fixture on Spanish Fork Main since 2000 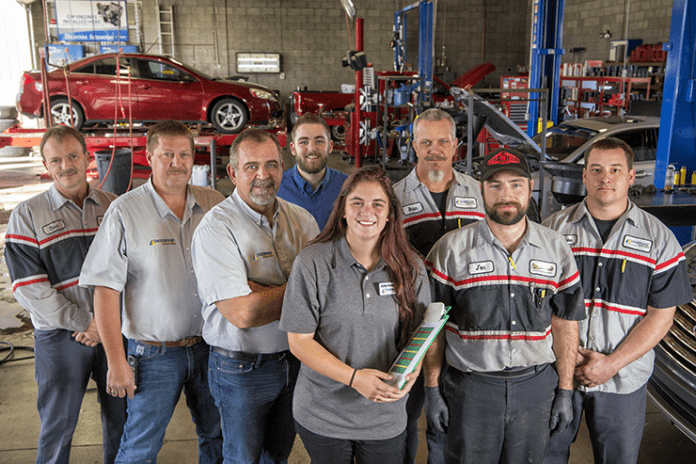 r By Clark H. CarasrThere really isn’t a kid in Spanish Fork and the surrounding area that doesn’t know what it means to “Rod Main.” It’s basically a right of passage once you get your driver’s license and consists of on a weekend night making your way in your auto slowly along the historic Main Street south to its end one block south of Glade’s Drive In.rMaking a U-turn and heading north, slowly and making a U-Turn at 900 North. But because of public safety and city ordinance, it’s something you only do once instead of in the days of Main Street business owner Todd Dickerson when the routine was repeated on a Friday or Saturday night again and again.rThe stop came at Glade’s or Barry’s when you found that group of guys or girls you might have you eye on, and sometimes it was to pull into a parking lot to show off a particular make or model of a car or sound system.rThe amazing thing about Todd Dickerson, a former Spanish Fork High School student and now vice president of the Spanish Fork Salem Area Chamber of Commerce, was that he could probably fix any number of clinks, clanks, or sputters happening in the vehicles on the boulevard.rDickerson didn’t just tinker with his or friends’ vehicles, although his excelling in his projects in high school bays helped him in landing jobs at some of the most noted garages along Spanish Fork Main until in 2000, at 34 W. 1900 North, Dickerson Automotive opened its doors and bay doors with the motto “The Finest Repairs With Personal Care.”rDickerson likes to point out that his staff are all trained and certified in auto diagnostics because, as his website declares, “It’s a beautiful thing when your vehicle operates exactly as it should.”rDickerson recently became the chamber’s newest Platinum level member, which means he and his business invest $1,000 a year in the community to help with such things as the Winter Lights Parade, Easter Egg Hunt and numerous other events in the year. Dickerson will become president of the chamber in January 2017.

The Funny-ish Files: Get up and do something!