Photographing Moroni and the moon 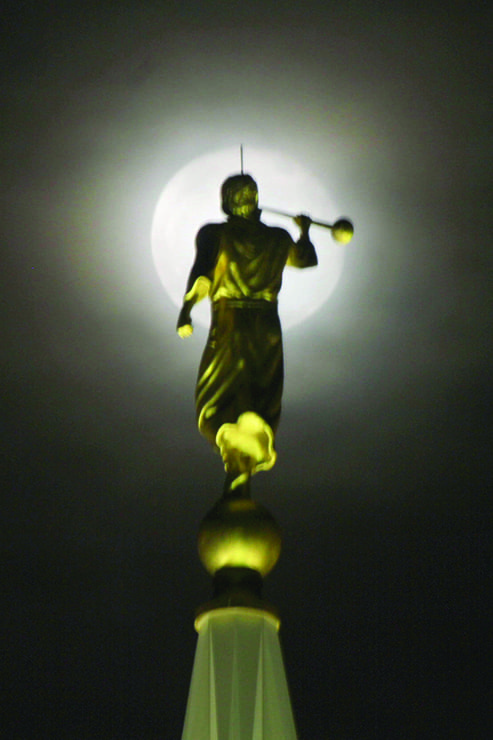 r On the evening of Nov. 14, we had what is popularly called a “Supermoon” or what astronomers call a perigee full moon. This is a situation where the moon’s elliptical orbit puts it in its closest position to the earth. The result is the moon appears slightly larger than normal. Actually, the information I read was that the moon should appear about 7 percent larger.

This got me thinking about how to take advantage of a slightly larger moon. Then I got an idea: the moon rises in the east, and wouldn’t it be neat to get a silhouette of a Moroni sculpture in front of the moon? I thought the Payson Temple would be the best possible location with a parking lot on the west side of the temple for positioning the camera and tripod. A commitment kept my wife Janice and me from scouting out the location on Nov. 13, so Monday night the 14th was the first opportunity we had to be onsite. We arrived about an hour before sunset for some temple photos and to patiently wait for the moonrise.

Finally, at about 7:15 p.m., Janice said, “There it is,” as the moon peeked up over the ridge of the mountains on a perfectly clear night. The parking lot at the temple is closed on Mondays and we found we could not align Moroni and the moon. We searched for other locations that might give me the view we wanted and could not find what we needed. The conclusion was we should return on Tuesday evening. On Tuesday, around sunset, we were in the parking lot on the west side of the temple and ready to track the rising moon. However, on Tuesday the 15th the sky had a thin overcast which defused the moonlight. The moon rises in an arc, and I had to move the camera and tripod from the southwest corner of the temple parking lot to the west center of the parking lot. When the moon was directly behind Moroni, the tripod had to be moved a few inches for each exposure.

The photo concept is what I wanted and makes a neat photo possibility. A clear sky would have made the photo work better. I learned a lot from my effort to photo Moroni positioned in front of the moon. This project also illustrates the time and effort often required to pursue a vision or a project.