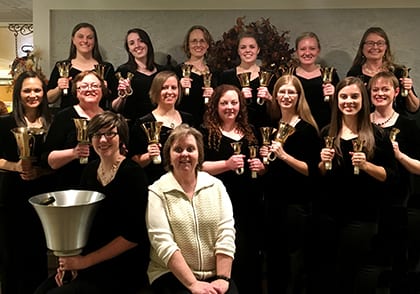 r The Utah Valley Handbell Choir will present a Christmas concert at the Springville Museum of Art on Sunday, Dec. 11, at 4:30 p.m. The event, sponsored by the Springville Arts Commission, is free to the public and seating is first come, first served.

The Utah Valley Handbell Ringers are a volunteer performing handbell choir with members who share one thing in common: the love of handbells and the music they produce. The group practices together weekly with the goals of performing the highest quality handbell music possible and sharing their incredible sound with people everywhere.

As a community group, the Ringers can appear at an unlimited variety of venues including churches, corporate parties, firesides, festivals and talent competitions. In 1999, they were honored to perform during the worship service at the world-famous Crystal Cathedral in Anaheim, Calif. The Ringer’s director, Karen Eskew-Wyllie, began playing the bells years ago in Florida. She and her husband Neil moved to Springville in 1991 where she became director of a small church handbell group that eventually became the Utah Valley Handbell Choir. Over the years, the group has grown in both size and expertise to consistently produce outstanding music at each concert. Eskew-Wyllie has made it her personal mission to share the unique sounds of the handbell with concert goers throughout Utah and beyond.

Cast of bronze (copper and tin), the bells are each tuned to a single tone. When rung together or in succession, they produce melodies full of rich tones. The ringers must wear gloves to protect the delicate metal surface because once damaged, a bell must be melted down and recast. The black and white handles are comparable to the black and white keys on a piano and denote the sharps and flats of a note. At this year’s Springville concert, the group will perform a variety of Christmas favorites. The choir has produced CDs of handbell music that will be available for sale during the concert. The handbell choir can be reached through its website at www.utahbells.com. They were featured in a Pizza Hut video which can be watched at https://www.youtube.com/watch?v=EtaETOfIegA.rAlso as part of the museum’s Sunday Concert Series, Hat Trick Trio will perform at the Springville Museum of Art on Jan. 15, 2017. This instrumental trio consists of April Clayton on flute, David Wallace playing viola and Kristi Shade performing on the harp. All three performers are well known and recognized artists.

Nebo integrating art in other areas of curriculum