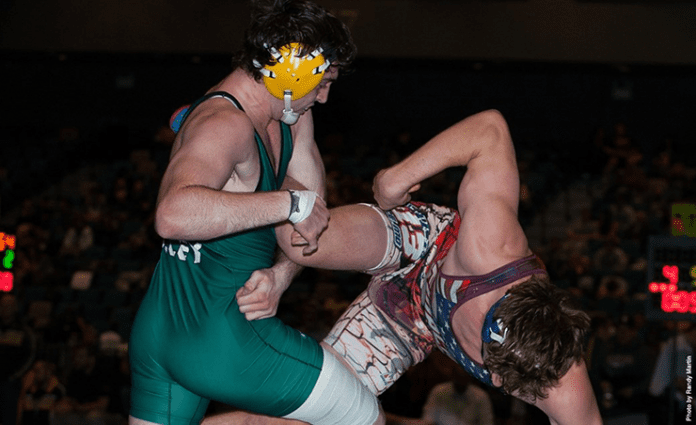 Following Thursday’s home opener, the Wolverines will hit the road for the 22nd annual Reno Tournament of Champions that will be contested on Sunday, Dec. 18 at the Reno Events Center in Reno, Nevada. The one-day tournament will begin at 10 a.m. MT/9 a.m. PT and will conclude with the championship finals at 7 p.m. MT/6 p.m. PT.

The Wolverines will enter Thursday’s dual meet with a 1-2 overall record (0-0 Big 12) after dropping a 32-14 contest at fellow Pac-12 foe Boise State last weekend. UVU won just three of the 10 bouts on the night to fall to the Broncos.

Dennison earned Big 12 Conference Co-Wrestler of the Week honors for the first time of his career on Monday after picking up his first-period fall over Gonzalez. The victory not only marked Dennison’s ninth of the season, as he improved to 9-3 overall and 2-1 in dual action, but also his fourth by fall.

Redshirt freshman 174-pounder Kimball Bastian leads UVU on the season with a 12-7 record, while junior Jordan Karst (heavyweight), sophomore Raider Lofthouse (157) and fellow redshirt freshman Tanner Orndorff will enter Thursday’s action with respective 11-2, 11-4 and 11-8 records, and the 125-pound Brown is the lone Wolverine to enter Thursday’s action with an unblemished 3-0 dual record (10-5 overall).

ABOUT OREGON STATErThe Beavers, who are just outside the USA Today/NWCA Division I Top 25 poll and currently ranked 23rd by InterMat, are off to a 1-2 start to the season (0-0 Pac-12). OSU holds its victory on the year over Duke (22-20), and has suffered setbacks to Appalachian State (15-25) and No. 11 Michigan (7-38). Oregon State will enter Thursday’s dual off of a 16th-place finish out of 35 teams at the Cliff Keen Las Vegas Invitational on Dec. 2-3 with two placewinners and 34 total points. Senior Joey Delgado (149) and sophomore Corey Griego (197) led the way by both placing fifth at the renowned tournament.

Three Beavers will enter Thursday’s contest nationally ranked in the latest top-20 polls, as 2016 NCAA qualifier Griego is ranked 14th at 197 (InterMat), two-time NCAA qualifier Delgado is 19th at 149 (InterMat) and fellow two-time NCAA qualifier Joey Palmer also comes in at 19th at 141 pounds (FloWrestling). Delgado will enter the match with a 7-3 season record, while Griego holds a 7-4 clip and Palmer a 5-2 ledger. As a team, the Beavers won their fifth straight Pac-12 Championship a season ago.

ALL-TIME SERIES VS. OREGON STATErOregon State will enter Thursday’s contest holding to a slim 2-1 all-time series lead over UVU but the Wolverines are coming off of a 20-19 upset victory over the then 18th-ranked Beavers in Corvallis last season (Nov. 21, 2015). Both teams won five bouts apiece last season, but upset wins from departed seniors Chasen Tolbert and Derek Thomas along with bonus-point wins from Thomas, Ross Taylor and Lofthouse were the difference in the contest, as the Wolverines managed to record the one-point victory over the nationally ranked Beavers.