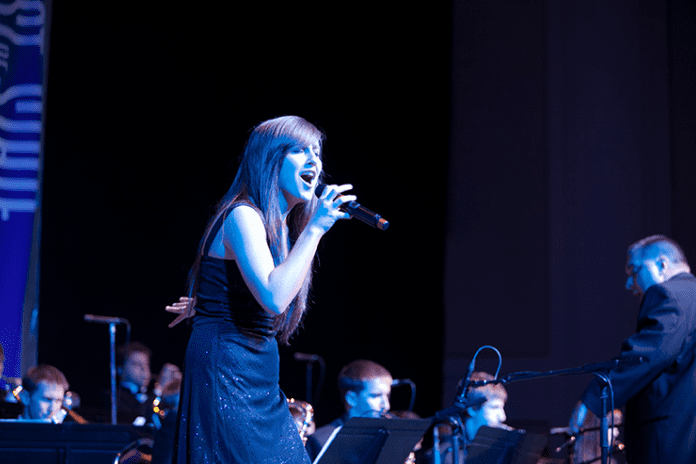 r It’s the holiday season, and for audiences at SCERA Center for the Arts, December will be even more festive at Caleb Chapman’s Crescent Super Band’s joyful Crescent Christmas concert Dec. 22 and 23.

Not only will they see and hear the considerable talents of more than two dozen gifted youth musicians, they also will feast upon the sounds highlighted in Chapman’s second Christmas album, which was just released. Among the highlights will be his arrangements of “This Christmas” and “Winter Wonderland.” Joining Chapman as special guests are vocalist David Osmond and The Little Big Band on Thursday and on Friday vocalist Ryan Innes and The Voodoo Orchestra will be featured.

“I believe this is our third year with Caleb’s musicians, and it has sold out every year.  The caliber of talent is jaw-dropping, “says Adam J. Robertson, SCERA’s President and CEO.       Chapman has created a unique way of presenting music that not only taps into the best youth musicians but also is evidenced by the armload of awards he receives for his skills as a performer, producer, author and educator.

He auditions and accepts only the finest Utah musicians ages 8 to 18 and teaches them a celebrated method for jazz articulation and styling. He selects about 150 musicians for his coveted program, and they perform on several levels, including the premier group, the Crescent Super Band, who also boast talented young vocalists who accompany the band on many holiday favorites.

Chapman himself is something of a one-man band and has demonstrated his saxophone chops with many other bands and musicians and performed the National Anthem on solo saxophone at NBA games for the Boston Celtics, the Miami Heat, the Denver Nuggets, the Washington Wizards, and the Utah Jazz.

His awards as an educator and conductor line his walls and include Utah’s Governor’s Performing Artist Award, dozens of DownBeat Awards, designation as the John LaPorta International Jazz Educator of the Year and Utah’s Best Educator (2011) and Best Music Educator for several years, including 2016.

Name any band, and the odds are good Chapman has performed or recorded with them. A small sampling of the 200+ musicians and groups with whom he has associated includes the Dave Matthews Band, Journey, Big Bad Voodoo Daddy, Tower of Power, The Rolling Stones and the Saturday Night Live Band.

An advocate of giving back, Chapman serves as president for the Jazz Education Network, which promotes jazz education. He also serves on Utah Gov. Gary Herbert’s executive committee of the Utah Arts Council.