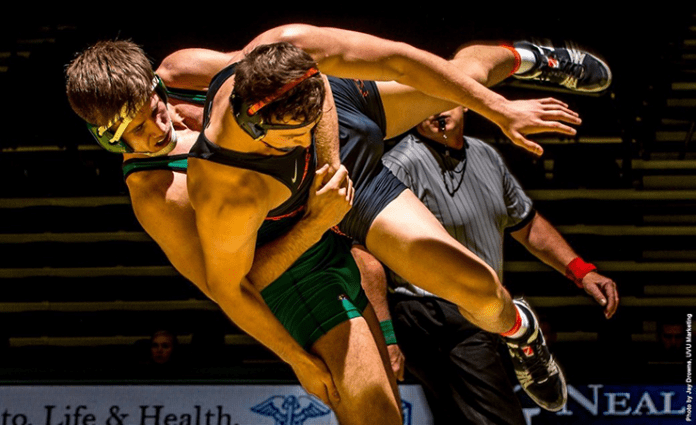 r Utah Valley University wrestlers Jordan Karst (heavyweight) and Tanner Orndorff (197 pounds) both had their 2017 Southern Scuffle runs come to a close just one win shy of securing a medal finish on Monday morning at McKenzie Arena in Chattanooga, Tennessee.r rKarst and Orndorff were the lone Wolverines to advance to Monday’s second and final day of competition at the premier holiday tournament and had their inaugural Southern Scuffle runs finish with a combined 7-4 record.r r”Jordan and Tanner both had very good performances and wrestled well,” head coach Greg Williams said. “Both gave themselves a chance to place at the toughest tournament there is outside of the postseason.”r rAfter going 4-1 on New Year’s Day to punch his ticket to Monday, Karst had his 2017 Scuffle appearance come to a close by falling to the No. 6 seed and 12th-ranked Jared Johnson of the host Chattanooga Mocs. After securing an early takedown in the opening period, the two-time NCAA qualifier Johnson followed that up by pinning Karst in the first stanza to end the UVU junior’s outing with a 4-2 record.r rKarst, who placed third in his weight class at the Reno Tournament of Champions just prior to Christmas, earned his four victories at the 2017 Southern Scuffle over Campbell’s Jere Heino (5-3), Lehigh’s Christian Colucci (5-3), Oklahoma State’s Tanner Allen (2-1, TB-2) and Missouri’s Austin Myers (6-4, SV-1). His lone two setbacks came to a pair of nationally ranked wrestlers in the 12th-ranked Johnson of Chattanooga and the eighth-ranked Denzel Dejournette of Appalachian State.r rAfter posting a 3-1 record on Sunday to advance to the tournament’s second day of action, Orndorff dropped a hard fought 10-6 decision to the No. 8 seed and 2016 NCAA qualifier Owen Scott from Cornell to end his 2017 Scuffle run with a 3-2 record. Trailing Scott 6-3 in the second stanza, the Wolverine redshirt freshman cut the deficit to one at 6-5 by securing a two-point reversal. Cornell’s Scott then put the match away in the final period thanks to an escape, a takedown, and an additional riding time point to eliminate Orndorff from the competition.r rOrndorff, who placed eighth in his weight class at the Cliff Keen Las Vegas Invitational in early December, posted his three Scuffle victories over Gardner-Webb’s Drew Barrett (10-0), Virginia’s Jay Aiello (11-9, SV-1) and Chattanooga’s DJ Smith (8-1). His lone losses came to the eighth-seeded Scott from Cornell and the No. 7 seed from Oklahoma State Derek White (3-1).r rFour other Utah Valley grapplers advanced to Sunday evening’s second session of the tournament, but all four had their tournament runs come to a close that session. Jarod Maynes (133 pounds) along with unattached freshmen Taylor LaMont (125) and Durbin Lloren (133) paced the group by all recording 2-2 records at their first Southern Scuffle appearance, while 174-pounder Kimball Bastian had his inaugural Scuffle run end with a 1-2 outing. r rEight other Wolverines also took part at the tournament but all had their 2017 runs come to a close during Sunday’s opening session. Heavyweight Dustin Dennison led the way by going 2-2 with a pair of major decisions while 149-pounder Grant LaMont too posted a 2-2 showing, which included a victory by fall. Mitch Brown (125), Koy Wilkinson (165) and Will Sumner (184) were next by each finishing with respective 1-2 records, while Chase Call (141), Trevor Willson (141) and Raider Lofthouse (157) rounded out the group with 0-2 showings.r r”Most of the guys wrestled really tough here. It’s a very competitive tournament,” added Williams. “We come here to have opportunities to compete against ranked opponents. We lost a couple of matches off of mistakes. Those were disappointing, but only because they cost our guys the match. Overall I was really proud that the guys were opening up and really trying to progress and score against top caliber wrestlers.”r rThe Wolverines (2-2, 0-0 Big 12) will now return to Orem to host the 10th annual UVU Open on Saturday, Jan. 7 in the newly named Lockhart Arena (PE Building). The all-day tournament will begin that morning at 9 a.m. MT and will be contested on four mats. Following Saturday’s open tournament, Utah Valley will return to dual action when Air Force comes to town on Jan. 13 for a Big 12 Conference contest.