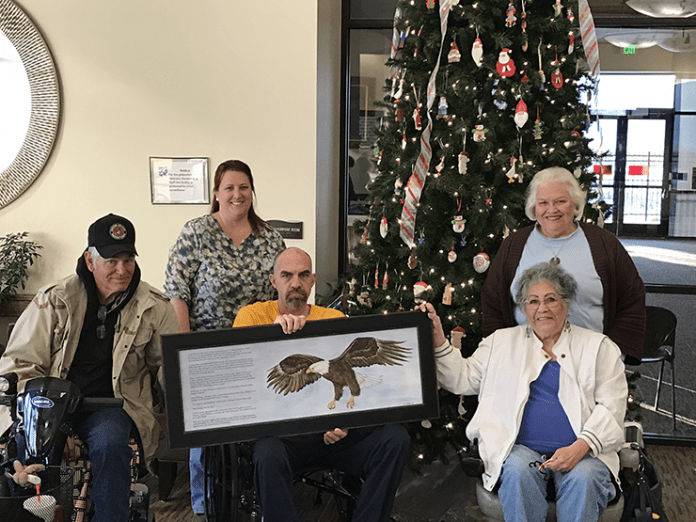 r Local artist Diane Sebring has found a way to combine three of her passions – watercolor, birds and patriotism – in her beautiful depiction of our nation’s symbol, the bald eagle.

“Eagles are amazing,” Sebring said. “I love painting all birds, but eagles are my favorite. You can feel their majesty, their power.”

Sebring has painted birds and other wildlife for many years, with many of her projects taking up to 30 hours. The time she spends with them makes each one have personal meaning for her.

As she began working on this piece, a feeling came to her that this beautiful creature needed a special home. That was when the idea to donate him to the Central Utah Veterans Home in Payson began. She has always been a strong supporter of our veterans and deeply grateful for the sacrifices they have made. She wanted her eagle to show the veterans living there that they are appreciated and that they are loved.

“For all her faults, this country is the greatest place to live on our planet,” Sebring said. “It is that way because of the freedom we have to live, learn and believe as we choose. That freedom was won for us and is preserved still for us by our veterans.”

Sebring’s daughter Lorene Sebring Moore has written several stories based on their family’s history. When her mother asked her to come up with a story that could provide the narrative for this painting, she was excited to be a part of the project. In her family history research, she had found information about John Sebring, who served as captain of a battalion in New Jersey during the Revolutionary War.

“We know John served, along with his three brothers, his son and other relatives,” Moore said. “He resigned as an official in the city government to lead his relatives, friends and neighbors in the fight for our freedom. This story reflects who we believe he must have been to lead them.”

The Photo Shop on Main Street in Payson printed, mounted and provided the frame as their contribution to the project. Owner Steve Parson was glad to be able to be a part of it as well.

Veterans Eric Wiechman and Terry Winter, and Guadalupe “Lupe” Warren, a widow of one of our veterans, accepted the painting on behalf of everyone living at the home.

“I can’t wait to see where they hang it,” Warren said. “It means a lot that people have not forgotten us.”

Sebring truly has not. She has also donated homemade cards for the veterans to be able to send to their families on special occasions and has participated in several projects sending homemade cards overseas to military personnel for the same purpose.

“Most of us just run to the store when we need a card,” Sebring told us. “They can’t do that easily, some not at all. Making blank homemade cards allows them to be a part of those special times with their families instead of feeling like they miss out on them.”

Always on the lookout for ways to show her appreciation to veterans and military personnel, Sebring sees each opportunity as a small dent in what she feels they deserve.

“This is such a small gift compared to what they have given us,” Sebring said. “We owe them such a debt of gratitude.”

Legend has it that early in the American war for independence, a small group of colonists prepared to defend their homes against an overwhelming British force. They met in a field on the edge of town and watched as red coats massed on the opposing hillside.

Young men quivered behind fence posts. Old men did their best to stand taller than their work wearied bones felt. Sons looked at their fathers and prayed for the strength to make them proud. Fathers looked to their sons and wondered if they would ever live to see the freedom being fought for on the field of battle that day.

Many hearts were overcome with fear as the enemy began to advance. Career soldiers, masters in the art of destruction, stood between their fledgeling nation and the freedom they believed meant for them by the master of heaven. Men faltered in the realization that the price of freedom might not be within their power to pay.

Suddenly an eagle flying over head dove in front of the colonials with a mighty screech.

John Sebring, a farmer, more comfortable tending fields than taking lives, looked up to the eagle and found courage.

“He cries for our freedom!” yelled John, raising his Brown Bess high.

“Stay strong and be free!”

As the enemy approached the colonists stood and fought as ancient knights. Their freedom was won, the high price paid, for a nation born in an eagle’s flight.

Now the cry of an eagle is the veteran’s song, whose courage surpasses understanding. It’s the willingness to stand between tyranny and hearth; against any foe of freedom’s commanding.