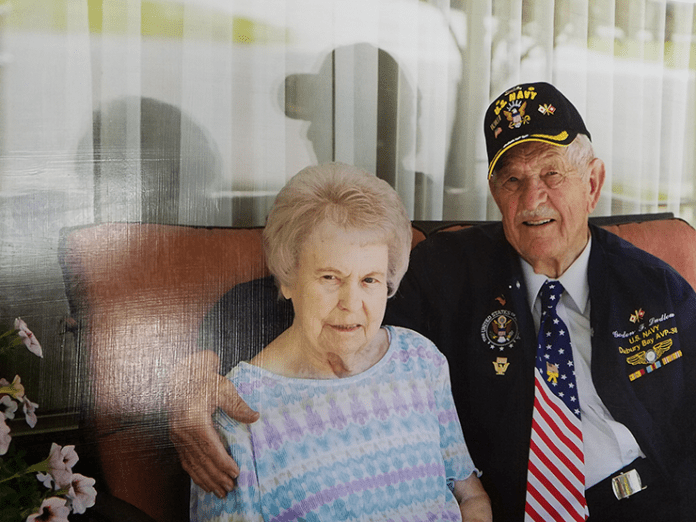 r Every community has people in it that make it great. I’m talking about salt-of-the-earth kinda people. Join us as each month as we highlight one of our longtime members in the community.

Joan Ludlow was born in July of 1929 at her grandmother’s house on 100 South in Spanish Fork. Joan and her older brother Clair grew up humble in Spanish Fork. Her father left when she was just 3 years old, and her mother Ruby Jex Hales raised them alone while working several jobs to provide for her children. Ruby would never remarry. One of her jobs was to help in the family business started by her father. Jex and Sons Broom Factory was established in the 1850s in Spanish Fork. Ruby’s brothers helped run that side of the business while she and her mother ran a seamstress business called the Thread Shed.

Joan was raised within the hustle and bustle of entrepreneurship. Her mother worked tirelessly to create a good life for Clair and Joan. Joan and Clair learned the principles of hard work and commitment to family. Spanish Fork was a bustling development by the time Joan was a teenager with people flocking to the area because of inexpensive housing and job opportunities in construction and at Geneva Steel. Joan started working on Main Street at the local switch board as an operator. This was where she would meet and fall in love with Gordon Ludlow.rGordon and Joan went to Spanish Fork High School at the same time, although Gordon was several grades above her. He was drafted into WWII out of high school and served honorably in the U.S. Navy. Upon returning home, Gordon started working at Geneva Steel. He caught the bus every day for work in front of the switch board office. After many sightings through the window by Joan, her co-workers convinced her to go out with him. They were set up on a blind date of sorts that ended up being a date to a wedding of all places. “The food was good and the atmosphere pleasant,” Joan said. Gordon and Joan would date six months before getting married in 1950. They just celebrated their 66th wedding anniversary.rJoan and Gordon lived on 600 North from that time to now. They raised six children in their humble home. “I told God I would have as many kids as he wanted me to, and I guess six was enough,” Joan said. The Ludlows grew up with little means; Grandma Ruby made everything the kids wore, even their underwear. Joan was a master in the kitchen; she canned everything under the sun and had a beautiful garden every year. She looked after her mother Ruby with a special love until Ruby passed away of old age.rJoan was a prankster. She enjoyed all holidays but especially enjoyed April Fool’s Day. “I always packed Gordon’s lunch for work. I once packed him nothing but chicken bones. When he sat down for lunch, all he had were bare bones to eat — of course I packed him some money so he could buy lunch that day,” Joan said. The kids would always worry and stir about what Mom would trick them with every year.rJoan really loved traditions. Christmas, Thanksgiving and Easter were special times for family get-togethers and building relationships. “One year Gordon talked me into going for a ride in his motorcycle sidecar — I reluctantly agreed, and he crashed the sidecar into our tree, right in the front yard. That was the last time I ever went for a ride on any of his motorcycles,” Joan said.rJoan now lives at Beehive Homes of Spanish Fork, living the quiet life, thinking of times that have passed and taking peace in knowing her children are well. She has 20 grandchildren and 25 great-grandchildren. Thank you, Joan Ludlow, for raising an amazing family and helping to make our community great. If you would like to contact Joan, you may write or visit her at Beehive Homes of Spanish Fork, 858 E. 100 South, Spanish Fork, UT 84660.

Hats off to our veterans