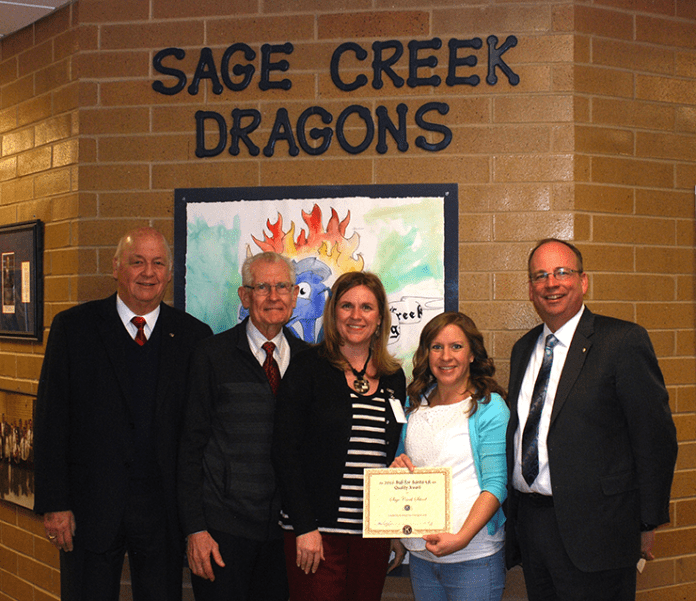 r On Dec. 5, 2016, Mike LeFevre, president of the Kiwanis Club of Springville, along with other members of the club played Sub for Santa at Reagan Academy and Sage Creek Elementary School. Because those Springville schools entered more than 50 runners in the Kiwanis Sub-for-Santa 5K Run held Oct. 15, they won several prizes. Second, each school received a $400 Kiwanis bonus for enrolling more than 50 in the 5K Run.

Third, each school won the right to select one student to receive an orthodontic “scholarship” generously donated by Warren Orthodontics, located at 688 W. 400 South in Springville. Dr. Casey Warren is a member of the Kiwanis Club of Springville and a native of Mapleton. Each of those scholarships is valued at around $5,000.

Five other elementary school PTAs in Springville entered a total of 52 runners, and their PTAs received a total of $780.

Funds for the awards came from the Kiwanis Club of Springville’s fourth annual Sub for Santa 5K Run last October. More than 175 runners and walkers ranging in age from 7 to 75 gathered in the crisp morning air at the starting line in the Springville High School stadium. Adding to the crowd were another 50 volunteers from the SHS Key Club, the Kiwanis club and their families.

An important feature of the Kiwanis Sub for Santa 5K is the partnering with all Springville and Mapleton elementary school PTAs to raise funds for school needs and benefit children with a Warren Orthodontics “scholarship” that they could not otherwise afford. First, all the race fees attributable to a runner’s school are given back to that PTA to benefit school programs. Second, if a school enters at least 50 runners, then that school qualifies for receive an orthodontic “scholarship,”  and they also qualify to participate in the Winners Cash Prize provided by the Kiwanis Club of Springville.

Medals were given to the winners of the different age groups. In addition, more than 85 race prizes were donated by local merchants and given out to the participants in a drawing at the end of the race.rThe Kiwanis Club of Springville was chartered in 1921 and has been serving the children, youth and families of Springville continuously for 96 years. Kiwanis International is an international organization that helps humanitarian efforts throughout the world.