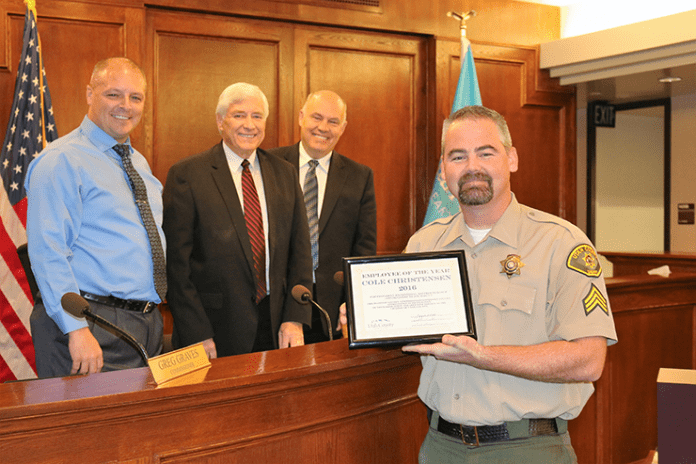 r Utah County commissioners honored all of the dedicated officers and employees of the Utah County Sheriff’s Office in a commission meeting held Dec. 13, 2016, along with Sergeant Cole Christensen, who was named Utah County Employee of the Year.rAs part of that recognition, Darin Durfey read this tribute from Sheriff Jim Tracy, who was out of town on business.r”A Tribute to the Men and Women of the Utah County Sheriff’s Office:rAs sheriff, I have had the opportunity to observe the men and women of the Utah County Sheriff’s Office as they experience daily, through their work, the good and the evil that comes from an increasingly more complicated and at times violent community.rDaily I witness and receive reports of the many undocumented acts of bravery and compassion carried out by deputies and see the physical and emotional pain they endure as they witness the extreme acts of cruelty that one human being can inflict upon another, and equally incredible, they observe many acts of bravery and kindness from everyday citizens helping victims and the less fortunate of our communities.rI have witnessed deputies comforting mothers who were crying inconsolably over the news of a murdered child, or at a traffic accident holding an infant in their arms while rendering first aid only to feel life itself leave the small crushed body despite their best efforts.rI have seen a deputy extend a hand softly placed on the shoulder of a victim of sexual assault and speak a few whispered words of reassurance bringing comfort and confidence to a traumatized victim.rI have witnessed the ecstatic shouts and elated joy of a parent as a deputy emerged from the woods with a reported lost child, now safely in tow.rI have been with deputies to countless crime scenes where the smell of death was so strong that you could taste it. I have seen the pain on a deputy’s face and the following long, cold, silence while attempting to process the vision of a crime scene that contained sights that no human being should ever see, then repress it all and finish out the remainder of a 12-hour shift, never allowing what was seen to affect future citizen contacts for the remainder of the day.rI have seen deputies forge ahead with courageous hearts when the weight of unjust judgement was heaped upon their backs as they attempted to solve the failures of society that they did not create, but were scorned and ridiculed when their actions solved the problem, but not in the manner acceptable to those who did create the problem and then called demanding law enforcement action, but who have never had to step into harm’s way.rI have attended too many law enforcement funerals, including one of our own, and witnessed the widowed wife and children grieve, feeling lost and alone even while surrounded by a sea of uniforms worn by fellow deputies wondering if they will share a similar fate.rIf you could see what I have seen, you would understand the magnitude of what these deputies do, day in and day out, for so many. If you could see what I have seen, you too would be proud of these admittedly flawed yet extraordinary human beings who give so much, and endure so much, to protect and serve the innocent and defenseless in our communities.rDespite all the above, the deputies of the Utah County Sheriff’s Office feel it is an honor and privilege to serve the citizens of Utah County and feel that any personal cost to themselves is worth the result as they work daily to keep our county a safe place to live and raise our children.rTo work alongside such dedicated people is a privilege few will ever be permitted, and I am honored to have had that privilege. The deputies of Utah County have earned, and deserve, our respect and support.rRespectfully,rSheriff James O. Tracy”

A list of stellar reasons to buy a home in 2016