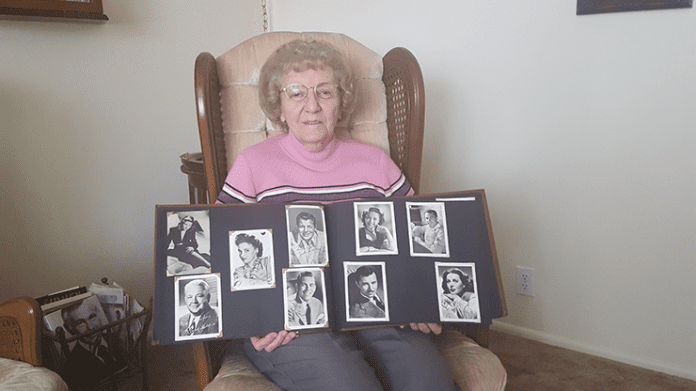 r When Betty Nichols was about 12 years old, she came down with rheumatic fever, and the treatment in rural Carbon County more than seven decades ago was to send people with the illness to bed for three months. That was the typical prescription, but awfully boring for a young child.

Nichols had always liked going to movies, and her mother, anxious to help her daughter endure her confinement, read an article that indicated if you sent a fan letter to a movie star and told them how much you liked them, they would send you an autographed picture.

“This was great fun,” Betty says. “Each week we sent out three fan mails, and in return, I got about three postcards or big 8×10 pictures signed by the stars.” She continued sending fan notes beyond the illness until she had filled two leather albums, now a bit dog-eared from countless viewings and smelling faintly reminiscent of gently aging library books.

She has donated them to the SCERA Center for the Arts in Orem, and the employees plan to frame them and hang them in the lobby near the historic movie theatre for patrons to enjoy.

“I have cherished my autographed pictures,” she says. “I always loved going to the movies and as a teenager I even served as an usher so I could see movies for free.” At her home in Helper, Utah, they had ushers with flashlights who would escort movie patrons to their seats.

Some of the stars in her albums became legends, such as Fred Astaire, Elizabeth Taylor, Lucille Ball, Lana Turner, Clark Gable, Gene Kelly and Judy Garland. Others have familiar faces that are often seen on nostalgia TV stations, such as the Turner Broadcasting network. Still others were character actors, and a handful are not readily recognizable except to aficionados of movies of the early ‘40s and ‘50s.

“I have a son and daughter, and I could have passed them on, but they are toss- ‘em out kind of kids, and I did not have the heart to have them thrown away,” Nichols says. “My favorites were probably Lana Turner and Ronald Reagan. I kept the Ronald Reagan picture and gave it to my daughter after letting her know she could not get rid of it because he was president of the United States.”

She says she is thrilled that SCERA, whose movie history started in 1941 with a showing of John Wayne’s “Shepherd of the Hills,” wanted her albums. “I was so happy when they took them and assured me they would be saved and taken care of.”

As a still energetic 85-year-old, Nichols worked as a volunteer at Timpanogos Regional Medical Center until June of this year. She received a humanitarian award from Health Heroes at the Huntsman Center in Salt Lake City for her hospital work. She would likely still be volunteering except an automobile accident earlier this year left her “hurting somewhat everywhere” in her body.

She started to think of her mortality.

“I’m going to die sooner than later, and although I am not sick, I am pleased my books are going to SCERA. They are so precious, and I just couldn’t think about dying without knowing they had a home.” Except for a three-year break when she lived in California, Nichols has lived in Orem behind Orem High School since 1964.

Nichols doesn’t get to movies much because, as she explains, “I don’t get out much at night.” But after a neighbor told her about SCERA’s daytime cinema classics program, she has decided she will “just have to start going again. Movies and the movie stars have brought me a lot of joy.”