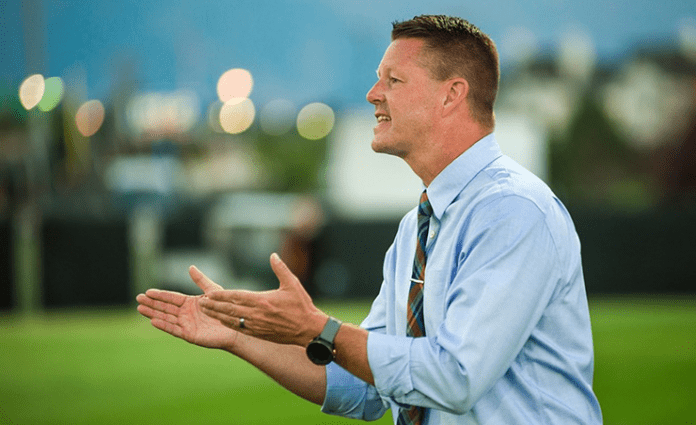 r By Submitted by Jason EricksonrAfter more than a decade of leading the Utah Valley University women’s soccer program, Brent Anderson is stepping down as the head coach at UVU to join the women’s soccer staff at Brigham Young University.

“I am deeply grateful to all those that I’ve been blessed to associate with during my time at UVU,” said Anderson. “The administrators, coaches, trainers, advisors, staff and athletes are second to none, they are simply amazing people. We have experienced extraordinary growth over the past decade and created so many special moments and memories that will stay with me forever. I need to express my gratitude to all of my student athletes for their trust, hard work and investment to build the program and achieve both academically and athletically here at UVU. I am looking forward to all they will accomplish in the future.”

The most successful coach in Utah Valley women’s soccer history, Anderson compiled a 110-100-14 (.522) record in 11 seasons at the helm of the program. He tallied a 44-14-4 conference record over eight seasons, including a 24-12-3 record in the team’s four seasons in the Western Athletic Conference.

Anderson most recently led Utah Valley to its third-straight 10-plus win season, compiling a 10-8-2 record this past year culminating in a trip to the semifinals of the WAC Tournament in Kansas City.

He led Utah Valley to its best season in school history in 2015, winning a school-record 14 matches. That same season, he guided the Wolverines to their first-ever WAC Tournament title and first-ever trip to the NCAA Tournament. Anderson earned WAC Coach of the Year honors for his team’s success during the 2015 season.

His teams at UVU have excelled both on the field and in the classroom. Anderson coached 51 all-conference honorees and 95 academic all-conference award winners. He coached three WAC Defensive Player of the Year recipients in Lauren Sack, Lexi Robison and Jessica Duffin. He also led his team to nine-straight NSCAA team academic awards.

“I would like to thank Brent for his dedication to Utah Valley and our student-athletes during the past 11 years,” said Utah Valley athletics director Vince Otoupal. “He has taken our women’s soccer program to new heights throughout his tenure at UVU. The impact his student-athletes have had on the UVU community cannot be overstated. Brent is leaving the program in excellent shape as we have a very talented and committed group of returning players. I wish him and his family the very best of luck in the future.”

Please contact Jared Sumsion at 801-360-4814 or at jared.sumsion@uvu.edu with any inquiries.