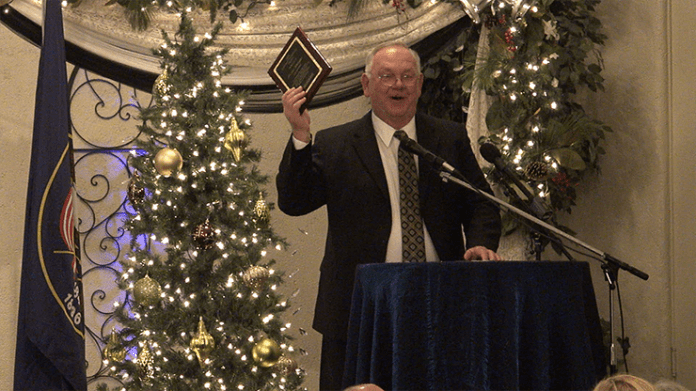 Local resident Randy Gordon has been named the recipient of the 2017 President’s Award from the Spanish Fork Salem Area Chamber of Commerce. The award was presented to Gordon during the chamber’s Installation Banquet on Jan. 11.

Randy Gordon was born and raised in Lake Shore. He served a mission for The Church of Jesus Christ of Latter-day Saints in the Carolinas, then married JoAnn Ainge of Spanish Fork. They have five children: four sons and one daughter. Gordon was employed by Intermountain Farmers Association for 40 years including time as general manager in Spanish Fork. He retired in January of 2015. He has farmed all of his life on his farm in Lake Shore.

In the late ’90s, he was one of the original organizers of and participants in the Spanish Fork Farmers Market, which was originally held at the park next to the library on Center Street. His primary crop was red potatoes. Gordon has watched the market grow and expand to become the best farmers market in the state. In the late 2000s, he sent his son and daughter-in-law, Brandon and Rachel, to the Provo farmers market to sell red potatoes. They sold one bag, compared with the 10 bags he sold in Spanish Fork. He decided to only focus on Spanish Fork’s market and never went back to Provo’s market.  Gordon’s grandkids have always been involved in the farm work, and they are the most overpaid farm workers around. Randy not only pays them in cash, but he also takes them to Barry’s or another Spanish Fork dining spot every week for lunch.

The Gordons sell all varieties of squash, sweet corn, red potatoes and pumpkins. Randy also donates pumpkins every year for Spanish Fork’s Harvest Moon Hurrah as well as drives the truck for the hay rides. At the end of every summer, the chamber holds its annual chamber barbecue, and for many years Gordon has volunteered to cook the steaks as well as the sweet corn donated from his own farm. Perhaps the most telling gesture of a true Spanish Fork farmer is the fact that Gordon has an honor box on the side of the road down in Lake Shore next to his home where any passerby can get fresh produce from the stand and drop their money in the box. His motto has always been, “It’s not about the money,” as he swaps a bag of produce for a hugs, handshakes or a friendly smile.