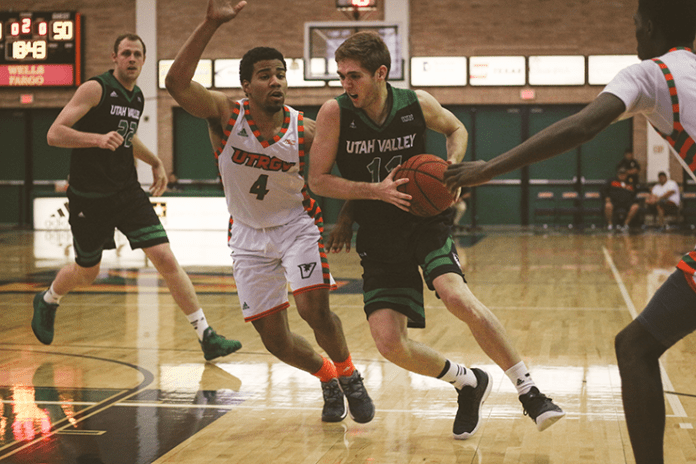 The win marks the team’s first-ever road sweep of New Mexico State and UTRGV since the Wolverines joined the WAC. UVU defeated NM State 84-72 on Thursday night. It marks the first time that any team in the WAC has swept the NM State/UTRGV road series.

“Thursday was so emotional that it would have been really easy for our guys not to be focused tonight,” said Utah Valley head coach Mark Pope. “They came out incredibly focused and with great force. They played with a ton of passion and a lot of energy and executed well enough to win. I’m really proud of these guys.”

Poydras scored his 17 points on a 5-of-10 clip from the field, including a 2-of-4 mark from long range. The senior guard also knocked down 5-of-6 free throws and dished out three assists with two rebounds.

Nelson registered his 14 points on 5-of-8 shooting, including a pair of threes. Nelson also hit 2-of-2 free throws. The junior forward pulled down a team-high seven rebounds with two assists and a block.

Ivory Young scored 13 points, while Conner Toolson and Kenneth Ogbe were also in double figures with 11 points apiece. Young pulled down five rebounds and dished out a team-high four assists. Toolson also pulled down five boards and tallied three assists with a steal.

Utah Valley will wrap up regular season play at home next week as the team hosts Seattle U on Saturday, March 4. Game time is set for 7 p.m. UVU will honor its departing seniors prior to tipoff.