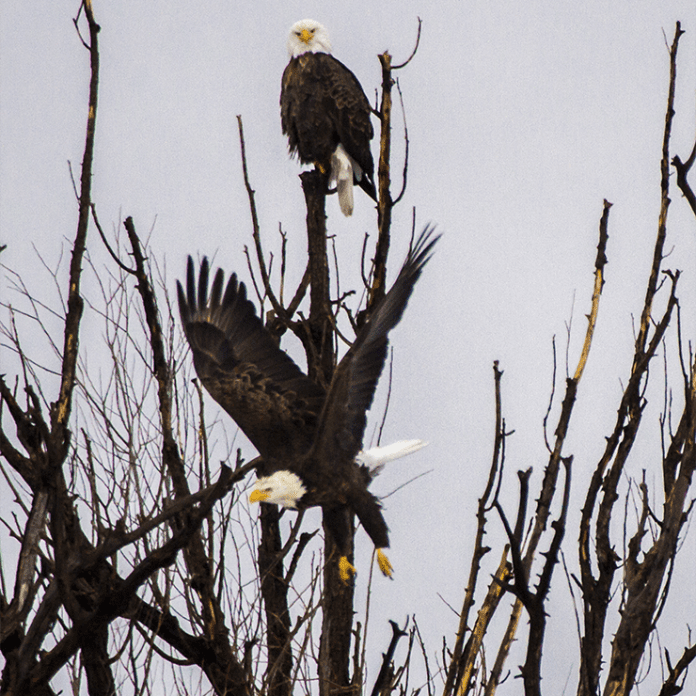 r During the years I have traveled the back roads of Utah, I have noticed that my opportunity to photograph bald eagles has been greater in the wintertime than in the summertime. I just discovered there is a reason for that. Hundreds of bald eagles migrate to Utah from Canada and Alaska to winter here between November and March. In fact, Utah is always in the top five to 10 states that eagles migrate to in the winter. The Utah Division of Wildlife Resourses explains that our latitude provides a relatively mild winter and we have an adequate supply of food for the birds. Most of the eagles fly back north when the winter ends. I had not previously realized that bald eagles were transient birds.

The name “bald eagle” refers to the white head because the bird is not actually bald-headed. Both the male and female birds look alike; however, the females are typically 25 percent larger than the male birds. The birds do not acquire the characteristic white head until they are 3 to 5 years old and sexually mature. In the wild, the average lifespan of a bald eagle is about 20 years, with some birds living into their 30s. The oldest bird in captivity lived to be almost 50 years of age. The bald eagle is a large bird with a typical wingspan of six to seven and a half feet and a body weight of nine to 14 pounds. It is reported that bald eagles mate for life unless one of the pair dies or disappears. It has also been noted that a pair will break up if repeated attempts at breeding have failed.

Bald eagles prefer to perch on and nest in tall, mature trees as they like to have a good view of the surrounding area. The birds I photographed a few days ago were in a stand of trees not far from Utah Lake. In that particular stand of trees were five eagles including two immature birds. What an amazing sight. The bald eagle looks so stately when perched on a tree top. It is easy to understand why it is both the national bird and the national animal. Then, to witness the bird with outstretched wings in flight is a moment that stirs the emotions of the wonderful life we have been blessed with.

As a side note, I waited an hour and a half behind a telephoto lens to capture the image of the two birds in the picture.