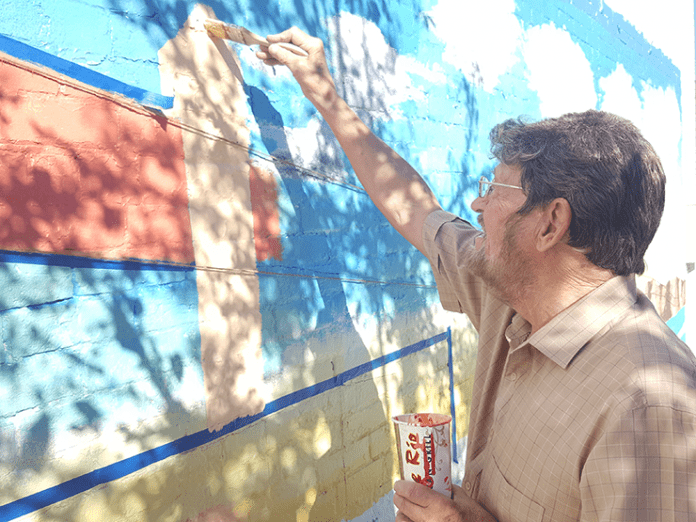 r Springville is known as the Art City and it has a new piece of art on display. At 296 S. Main is the Pier 49 Pizza Parlor and it has a new mural of the Golden Gate Bridge on the south side of the building. It is an eye-catching painting and certainly an attractive way of advertising the location of Pier 49 Pizza. What is really interesting is the story of the man who did the painting.

The mural was painted by Mark Shipley, whose daughter and son-in-law own the restaurant. Mark is a legend in the live theater business in Southern California. From 1967 to 1989, he owned and produced productions at the Gallery Theater, which was first located in Upland and then in Ontario, California. Mark and his wife Jeanne Black, a singer and actress, did everything to make the community theater work. That included not only acting but also building and painting sets, making costumes and publicizing the shows. After closing the theater in Southern California, he ran a theater production in Hilo, Hawaii, for 14 years before retiring to Mapleton to be near his children that live in the area. 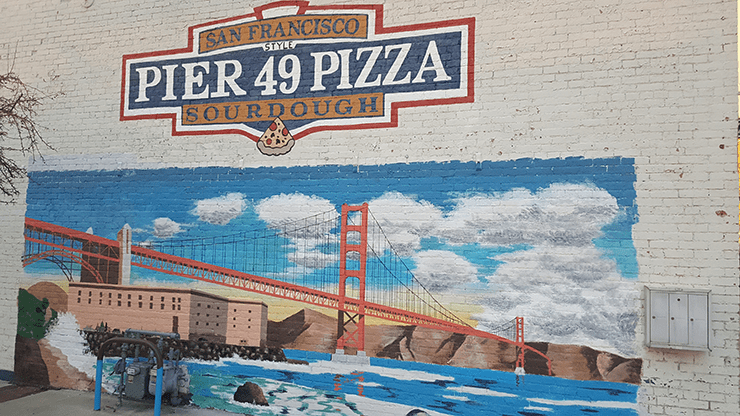 Mark’s daughter Tannia and her husband Andrew Hjorth had been fascinated with the Pier 49 Pizza business since their days many years ago as delivery drivers for the pizza parlor. After they pondered the purchase of the business for a few years, the owner agreed to sell them the business in January of 2016. They wanted to do some remodeling to make the establishment more reminiscent of San Francisco. Mark, who is quite the artist, did some paintings that were framed and placed behind booths along one wall. There was a backroom seating area where Mark suggested a mural covering the entire wall. Next came the idea of a mural on the outside south-facing brick wall of the building.

After seeing Mark’s work, the landlord agreed to the mural of the Golden Gate Bridge on south side of the building. Mark started the painting last fall after the weather turned cooler. It took him about a week to do the painting. He worked on a stool to paint the top of the mural. For Mark, who is 81, this was just like painting another stage backdrop. The pizza parlor now has a magnificent picture to represent their brand name, Pier 49 Pizza.

The pizza establishment was purchased by Tannia and Andrew to be run as a family business, and that it does, with three generations of family involved in making it successful. That also brings family-style customer service. The sourdough is excellent as well.