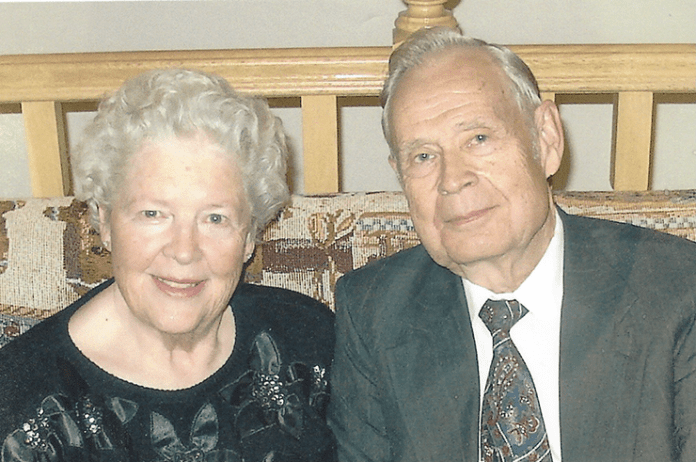 r Every community has people in it that make it great. I’m talking about salt-of-the-earth kinda people. Join us as each month as we highlight one of our longtime members in the community.rBevan J. Jones was born in January of 1926 in Cedar City. Bevan did not stay in Cedar City long — his father Emrone (Jack) Jones moved he and his mother Jenny Cox Jones to Los Angeles, California, where Jack began working for Union Pacific Railroad. One year later, the Stock Market would crash. Many people in L.A. lost their jobs. Jack had some education that allotted him a position as the bus driver for rail workers coming and going to rail yards for Union Pacific. Jack would work for Union Pacific his whole life, retiring as an accountant for the company.rBevan grew up in a tremulous time in L.A. – the Great Depression, mass deportations of Mexican workers, the Long Beach earth quake, mass flooding, and the “Zoot Suit.” However, these were also exciting times — the L.A. Olympics, Union Pacific Station opening, Hollywood booming and WWII beginning during Bevans growing up years. It was a time of U.S. innovation and digging out.r“I was really fascinated with radios; at an early age, the local police station had just started using radios. I used to walk around before garbage days and collect radio parts or broken radios that people had thrown out. I would bring the parts home and make my own radios and transmitters.” Bevan said. Bevan attended Alhambra High School, graduating in 1944. He immediately joined the Merchant Marines and attended a technical course on radio waves and transmitters in Boston. Bevan was assigned to the Liberty Ships to sail in the Pacific. Bevan worked for months at a time as the ships radio controller, allowing the ships to communicate with the fleet.rAt the end of his tour, Bevan moved back to L.A. and began working for Southern California Edison Electric Company. Because patents had such short lives in the early 1900s, Edison allowed electric utilities to use his patents so long as they used his name in the company name. Today, Edison International is a leading innovator in electricity production and storage. Bevan still had family routes in Cedar City and would occasionally make the drive to visit cousins. On one such occasion, his cousin introduced him to Dolores Fife – she was young and vibrant, and Bevan instantly fell for her. He would make the long car drive much more often over the next few months. He and Dolores were married in 1948 in the St. George LDS Temple.rBevan and Dolores lived in L.A. for a short time and had four children: Ronald, Nadine, Christopher and Richard. Soon they moved to Orange County, Newport Beach, and along came their last child, Paul. Bevan’s radio talents were in high demand; he was an expert in his field and radio was at its peak around the world. “Right about the time when the first public FM stereo radio wave was coming out, I was traveling for business. I was so excited to have it play on my radio that I called Dolores to have her get the radio set up. I told her how to hook up the wires over the phone and when she plugged it, in the whole thing fried, smoked and popped. Of course, this really scared Dolores and she refused to speak to me about radios for some time,” Bevan said.rSoon a Belgium company named SWIFT recruited Bevan to run their telecommunications section in Belgium, Germany. He packed up his family and moved to Germany. It was a wonderful time with new adventures and cultures to learn. Five years later, SWIFT branched out into the U.S., built a new state-of-the-art building in Virginia and asked Bevan to run the telecommunications division. Bevan worked for SWIFT until he retired in 1979.rDolores and Bevan celebrated their 60th wedding anniversary in 2008. Dolores would pass away later that year. Bevan’s children had spread around the country by that time and the sons in Utah decided that Utah would be the best place for Dad to spend his remaining years. Bevan has 25 great-grandchildren and 29 great-great-grandchildren.