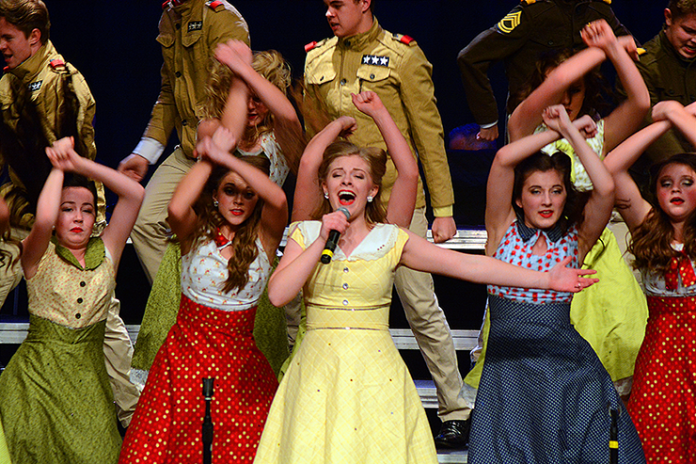 American Leadership Academy in Spanish Fork sports the only competing show choir from any Utah High School. According to choir director Rick Lunt, this is both a distinction and a disadvantage. “When we went to compete at the Heart-of-America competition in Kansas City, we were up against the best competing show choirs in the nation. These other choirs view this as their sport season. They’ve been competing for sometimes two months already in their geographic area and for us it is our first competition.”

Rick Lunt’s show choir Evolution competed against 12 nationally-ranked groups. The classification of 2A means nothing. Some high schools have hundreds of students auditioning for the few coveted positions, yet ALA, with it’s small pool to draw from, always manages to place somewhere near the top. This year they took fourth overall and have the added accomplishment of featuring the outstanding female vocalist.

“It’s always exciting when you get a call from the producer of the event asking who was the student who performed as the ‘blonde girlfriend’ and can you tell us her name? And I say, ‘Well, that’s really easy because that happens to be my daughter Krissy.’” Lunt laughs as if this admission sounds like favoritism. “And others from ALA have won that same award in the past. So I’ve been proud as a director and now I get the heartfelt joy to be proud as a father as well.”

Last names aside, there is a moment in the production where Krissy as one of many featured soloists belts out a fiery high note, holds it for an unnatural length of time, and then, defying the laws of physics, takes that note up another octave and makes it even louder before the song resumes the beat. As an audience member, one cannot help but utter, “Wow!”

Lunt’s son was part of the tech crew and was sitting in front of his dad during the award ceremony. “I had to tell him to stop talking and pay attention. Then they announced his sister’s name and he was like, “Oh wow, that’s exciting!”

“It’s just humbling when any of the students or groups win an award, it’s a real heartfelt tribute to all their hard work.”

Fifty-eight students, singers and techies and another nine band members make up the show choir. According to Lunt, every one of them must do their job excellently. If they don’t give a unified effort, something stands out as a mistake. For Lunt and for the students that all adopt this challenge, being good isn’t good enough. One of his favorite quotes is, “If you are capable of being excellent, why be just pretty good?”

By the time this article is being read, Evolution will be on the road to perform at another national competition in California. We wish them the best and thank them for representing our community so well.

The Story of the Christmas Carol