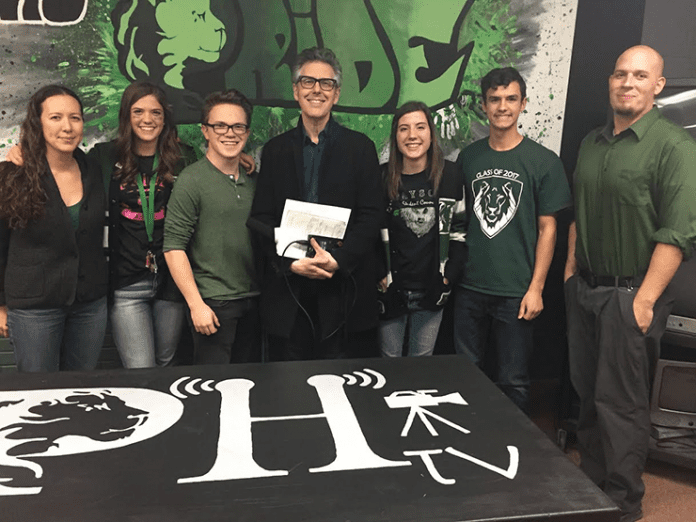 r The national radio show “This American Life” came to Payson High School recently to spotlight some amazing “Grand Gestures” going on at one of Nebo’s high schools.

Producer Meeks said, “I selected Payson High School and this particular story about kids going all out when asking dates to dances because it seemed like the perfect way to kick off what’s basically a Valentine’s Day show. Also, it’s a tradition that a lot of my co-workers had never heard about, so we wanted to shine a spotlight on it.”

The show’s host and executive producer Ira Glass flew out from New York to personally interview Payson students. Glass collected stories from Payson students in two different ways. First, Glass set up a studio in Clint Peery’s room and interviewed students who Meek had previously interviewed and knew the students had interesting stories. After the interviews at school and with the help of students like Ivan Webber, Kylee Wharton, Ezri Staheli and Max Bennion, Glass walked through the hallways at lunch time and talked to some random students to see if they had any interesting stories about asking others to dances as well.

Not only did Glass get to hear about all the interesting dancing stories, he experienced first-hand how to answer a girl for a dance at PHS! Glass actually rode along in the car with Webber as he answered his date to the Sweethearts Dance and experienced a funny story of his own.

Webber was going to answer Makadie Richman by burying a treasure chest in the snow with his answer inside. Glass, Wharton and Staheli were to stay in the car and witness the answer process. Webber attached a microphone so he could communicate back to those in the car. When Ivan was burying the chest in the snow outside Richman’s house, Kylee accidentally leaned on the horn of the car creating a loud, long honk. Richman came running outside while Webber was still answering preparing the treasure chest answer. Quickly, Webber finished and sprinted back to the car as the group sped away.

PHS Assistant Principal Jesse Sorenson said, “To have a national radio program that is broadcast to over 500 NPR stations nationwide and millions of weekly listeners around the country is a really big deal. Ira Glass is a National Public Radio icon, so to have him here working with our students is an opportunity that few aspiring journalists will ever have. Ira has mentioned how impressed he has been with our students several times today. Our broadcast journalist students Ivan Webber, Ezri Staheli and Max Bennion have set the whole thing up. In the early stages, they worked with Miki Meek, the show’s producer and Payson High School graduate, to have everything ready. Our students sought out potential students for interviews, set up interviews and even held a few Skype meetings to get to know what Ira and Miki would be looking for when they got here. Ivan, Ezri and Max have worked very hard on this project. It’s been amazing to see the skills Clint Peery, their teacher, has taught them. I hope this experience will show our students that the skills they have learned at Payson High can be a springboard into other learning opportunities and amazing professions that could potentially impact millions of lives.”

Payson High is known for its incredible broadcast journalism class taught by Clint Peery. The students were thrilled to get to meet and work with the famous Ira Glass. Ira and Miki spent the entire day with the students.

Mr. Peery said, “The reason that I teach is to provide students with opportunities to chase their passions, as well as learning and developing skills that will make them successful no matter what field they chose to go into later in life.”

Peery is quick to point out that some of the awards were also submitted through Nebo School District’s Advanced Learning Center.