Walker Productions is Home-Based Business of the Year 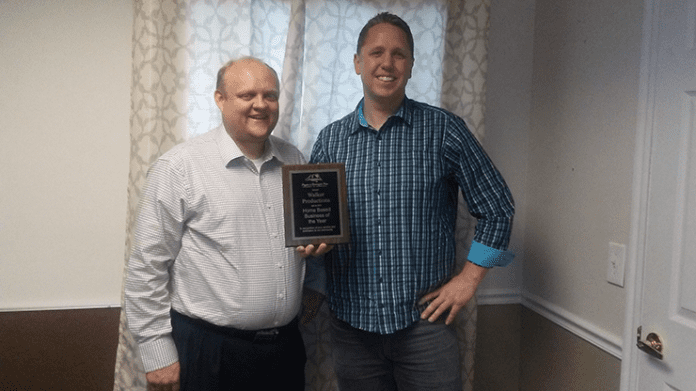 r In 2012, Josh Walker was searching for a way to take his career in a new direction. Now, nearly five years later, he has helped cities and chambers of commerce throughout Utah County get the word out about civic and chamber activities while cultivating support from local businesses.

In recognition of his efforts, Walker’s company Walker Productions has been named Home-Based Business of the Year for 2016 by the Payson & Santaquin Area Chamber of Commerce.

Walker had a great deal of experience in advertising when he decided to start his own magazine company. His first job was producing the 2012 magazine for American Fork’s Steel Days celebration. Having success with that endeavor, he approached Lehi City about producing its Lehi Family Week magazine, and he produced that publication as well. “Then I started approaching the local chambers and more and more businesses started using me,” Walker said.rSince then, Walker Productions has produced magazines for the Lehi, Pleasant Grove, American Fork, Spanish Fork and Payson chambers of commerce as well as Santaquin’s Orchard Days, the Lehi Round-Up, the Springville World Folkfest and the Highland Fling and Lindon Days celebrations.r“I found that it was a niche that not a lot of other companies even were thinking about,” Walker said.rWalker runs his business out of his Orem home and has contract employees that also work out of their homes helping with advertising sales, writing and editing, and layout and design.rA portion of the ad sales from his chamber magazines is returned back to each chamber, and while working in the community, Walker actively encourages businesses that are not members of their chamber to become members.rWhen he produces magazines for city celebrations, Walker assists the cities in finding sponsors for events, which helps fund the celebrations. For example, most of the events in American Fork’s Steel Days celebration are now free to the public thanks to sponsorships Walker helped cultivate. In fact, Walker Productions has been able to increase the participation of sponsors each year for the cities working with the company.r“It’s about the relationships that we’re able to make,” Walker said. “People do business with people they know and they trust, and that’s a big reason why we’ve been able to be successful.”rWalker is a fan of chamber of commerce participation; he recently took on the responsibility of serving as executive director of the American Fork and Pleasant Grove-Lindon chambers of commerce. He has also served on the board of directors for various local chambers. With the added responsibility Walker took on, Walker Productions is now co-owned and operated by Dann Goff.r“The chamber is all about helping businesses connect with each other and with the city and with the community that they’re in,” he said.rWhen not working within the communities of Utah County, Walker serves as a member of the Mormon Tabernacle Choir and recently traveled to Washington, D.C., with the choir to sing at the presidential inauguration.