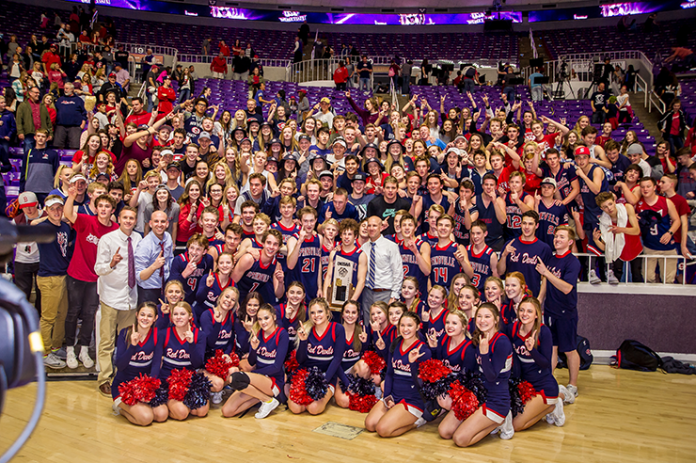 r Congratulations to the Springville High School Red Devils boys basketball team for winning the state championship game on March 4 in Ogden. The game was a nail-biter that went to overtime twice, but the Red Devils never gave up. The game ended with an 81 to 79 victory and the first state title for Springville High School boys basketball since 1958.

When the team returned to Springville at about 9:30 p.m. and came off I-15 at the north Springville exit,  they were met with a fire department and police department escort back to the high school. Crowds of people lined the street and then joined the convoy in their own vehicles. What a wonderful, classic American sight this was, the demonstration of pride and joy by so many for a record book team achievement.

What makes this game and the Springville High School Red Devils boys basketball team even more interesting is the story behind the team. The boys were long-time residents of Springville and had played together for years. Several of the team members come from families of basketball players. Bennett Hullinger’s dad played for Springville High in the 1980s and Jesse Hullinger’s dad was on the team in the 1990s. Elliot Jordan, the grandfather of sophomore Jaymon Jordan, played on the 1958 state championship team.

What will the five seniors on the team be doing after graduation? All of them have submitted applications for two-year LDS mission assignments. The seriousness and commitment with which these young men live their lives is a rewarding example of family and community values in Springville. Now juniors and sophomores will move up to take on next year’s challenge. Coach Justin Snell, you are doing a great job, and you have lot to look forward to.

See more pics in the initial release of this story.

Andrea Kirk art to be featured at Peteetneet