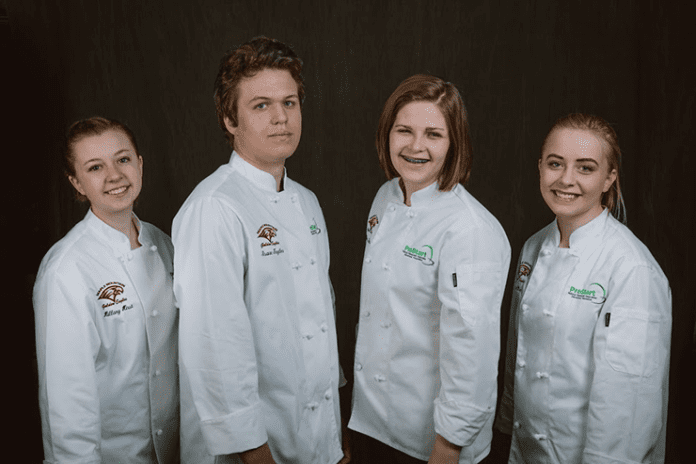 r “Wow!” “Mesmerizing!” and “Perfect!” were a few of the comments chefs made about the Maple Mountain High School ProStart Culinary Team’s three-course meal its members made at the ProStart State Finals in March. The team worked together to make Egg Yolk Ravioli with Sage-Bacon-Brown Butter sauce as an appetizer, Seared Sea Bass served over Pesto and Purple Fingerling Potatoes as the entree and Deconstructed Cheesecake for dessert.

Maple Mountain has sent many teams to compete, but none have ever advanced to the state finals until this year. The team ended up tying for third place. Its members are Hillary Hirst, Talia Olsen, Maddie Palmer and Isaac Taylor.

Their ProStart adviser Jane Wilkins credits the team’s success to their passion, teamwork and culinary expertise.

ProStart culinary teams develop a unique menu for a three-course meal, complete with recipes and food costs, and prepare that meal in 60 minutes using two butane burners —with no electricity or running water. They are evaluated on their menu, degree of difficulty, food safety and sanitation, knife skills, cooking procedures, food costing, teamwork, taste and presentation of their meal.

The student chefs had one week between the regional competition and state finals to make changes and improvements to their food based on the regional judges’ comments. For example, the judges felt the ravioli were too large to serve as an appetizer, so the team made the ravioli smaller by using quail egg yolks instead of chicken egg yolks. The judges were very impressed watching the team roll and fill the pasta dough they made from scratch. Chef Christian Kubek said he would order their ravioli at a restaurant.