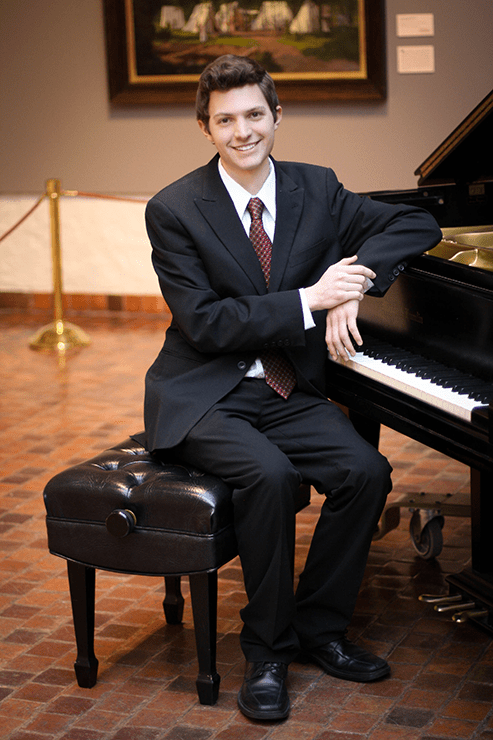 r Kaden Larson, a Brigham Young University student majoring in piano performance, will be the next presenter at the Springville Senior Center’s monthly lecture series. This event will be held at 6 p.m. on Wednesday, May 3, at the center, located at 65 E. 200 South in Springville. Admission is free and the public is invited to attend.

Larson, 22, began playing the piano at age 3 as a therapeutic activity to fight a severely crippling case of juvenile rheumatoid arthritis in his hands. He studied with Tricia West and Chad Schumacher and has been studying with Dr. Scott Holden since 2008. He has given many solo recitals and performances in locations throughout Utah including the Assembly Hall on Temple Square, the Madsen Recital Hall and the Eccles Fine Arts Center.

A recipient of the Reid Nibley Scholarship, Larson has just completed his junior year in BYU’s piano performance major. Last year he spent two months studying music in Vienna, Austria. Larson also enjoys singing in the BYU Concert Choir. He is active as a performer, competitor, accompanist and teacher and is currently serving as president of the BYU collegiate chapter of the Music Teachers National Association. Most recently, Larson was a selected winner of the 2017 Utah Philharmonic Orchestra Concerto Competition and will be performing with the orchestra on May 20.

The Springville presentation will be a performance of several pieces from different styles of classical music with a story or anecdote from the life of each composer that connects with the piece – in short, a brief exploration into the lives of great composers through their stories and examples of their music.