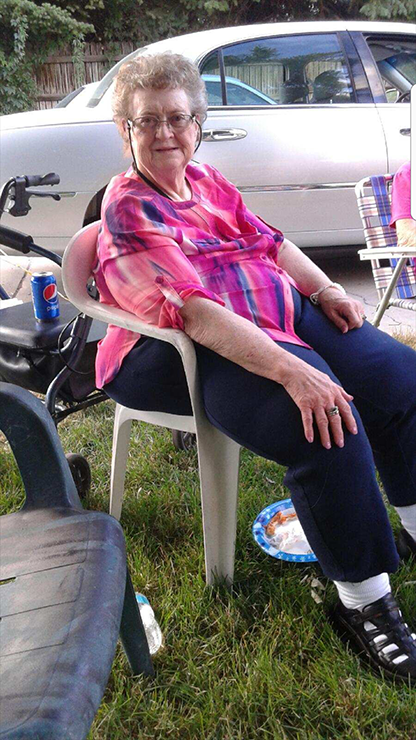 r Every community has people in it that make it great. I’m talking about salt-of-the-earth kinda people. Join us as each month as we highlight one of our longtime members in the community.

LaVon Brook was born in Fillmore Utah in 1935 at her grandmothers’ home—in fact she was born in her grandmothers’ bed. Her family did not stay long in Fillmore. LaVons father Robert A. Tilby her mother Eula, and older brother Carl moved to Baker Nevada where Robert worked for the railroad. Her mother cared for the children and kept the large property up. We had several chickens, and I loved playing with them, I used to pickem up and just carry them around the yard. I also tended rabbits—I mean we were watching one of my dad’s friend’s rabbits. We kept them in a large pen for several weeks–I think there were about 500 of them, it was so fun to see them running everywhere” said LaVon”.

While living in Nevada LaVons sister Dawn was born and shortly after her birth her family moved back to Utah. Robert began raising a large heard of cattle in the Goshen area. Lavon attended Payson High School. And that’s where she met her future husband, Neil L. Brook. Neil was on the football team, and very popular. LaVon was very quiet and kept to herself. “We were really completely opposite, I was so shy and timid, and he was so outgoing and popular”, said LaVon. One day she and her friends were walking home from school, when a group of boys drove up and offered them a ride.

LaVons immediate reaction was no way—after all she was very prim and proper and having some strange boys give her a ride home was not appropriate. Before she could say a word her girlfriend jumped in the boy’s back seat and urged the other girls to do the same. LaVon was silent for the entire drive—while her friend hung over the front seat talking and flirting with the boys—all the way. LaVon was dropped off last and one of the boys asked if he could visit her sometime. She turned red with embarrassment and mumbled something to the affirmative. That boy would visit again and again–thus began the high school sweet hearts—LaVon and Neil. Later LaVons children would make fun of her calling her “the pick up girl”.

After graduating high school LaVon and Neil were married in 1954. Neil was a great plumber and after a few years of school and training became a certified master plumber and pipe fitter. He was recruited by Geneva Pipe and worked there for many years. LaVon gave birth to four children Carol, Audie, Leon, and David. After 26 years of marriage tragedy would strike the Brook family—Neil was killed in an automobile accident, leaving his four children and wife behind—he was 48 years old. LaVon still had two children at home and was working at the Payson hospital as a Nurse. She was devastated and took two weeks off work. “I was a mess, I couldn’t do anything without breaking down into tears, I finally realized I had to shape up and fly right—I had kids to support and Neil wouldn’t want me to not live my life”, said LaVon.

LaVon worked at the Payson hospital where she was instrumental in the move to the new hospital on State Rd. She worked every department and was well known as the ‘count on’ employee. This shy humble farm girl touch so many hearts while caring for people at the hospital. She worked the night shift for 28 years before retiring from the Payson Hospital. If you have ever been to the hospital you were likely cared for by LaVon.rLavon lives at Beehive Homes of Payson assisted living enjoying the quiet life and remembering the days of raising kids and riding horses on the farm. She has 14 grandchildren and 10 great grandchildren. Thank you, LaVon Brook, for raising such great kids and being a member of our community. You may contact LaVon Brook by mail at 661 E 700 S Payson UT 84651.