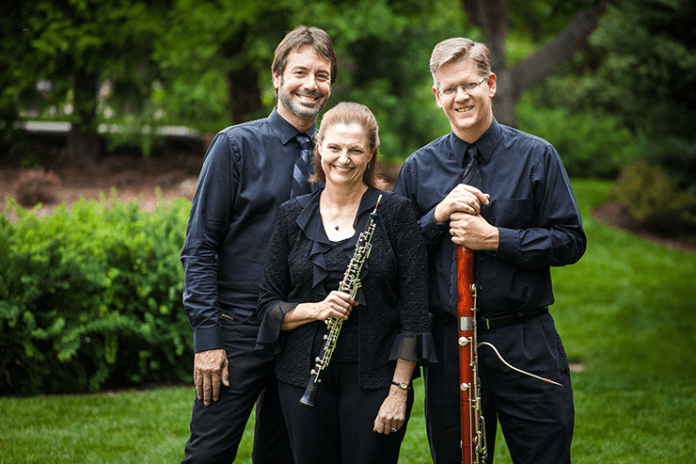 r The Sundance Trio will be featured in concert on May 21 as part of the Sunday Concert Series at the Springville Museum of Art, 126 E. 400 South. The concert will start at 4:30 p.m. and is free and open to the public. The concert is sponsored by the Springville Arts Commission.

The Sundance Trio was formed in 2005 to explore and perform trios written for oboe, bassoon and piano. Based in Utah, members of the trio are oboist Geralyn Giovannetti, bassoonist Christian Smith and pianist Jed Moss. Giovannetti and Smith are faculty colleagues at Brigham Young University’s School of Music where they also perform together in the resident woodwind quintet, Orpheus Winds. Moss is a much-sought-after solo and collaborative artist. Together, the trio has performed throughout the United States at colleges, chamber music series and at conferences. In early 2012, it completed an eight-week music tour in England.

In 2009, the Sundance Trio released its debut CD recording on the Centaur Records label. The CD includes premiere recordings of works by American composers Margi Griebling-Haigh and David Sargent. The Salt Lake Tribune wrote, “The ensemble play is also fabulous. It’s a remarkable collaborative effort by three like-minded musicians who are equals in musicality and technical astuteness. This is a very fine album, both in the performances and in its conception.”

Christian Smith is professor of bassoon at the BYU School of Music. Beyond his responsibilities with the bassoon studio, he teaches instrumental conducting, directs the woodwind chamber music program, and regularly performs with Orpheus Winds, the resident faculty wind quintet.

As an in-demand collaborative and concert pianist, Jed Moss has shared the stage with artists from around the globe. He appears extensively in duo and chamber music concerts at colleges and universities from coast to coast and has been the featured artist with orchestras in the Czech Republic, Uruguay, Texas, Idaho, Utah, California and Washington, D.C.rThere will be no concerts at the museum in June or July. Wonderful alternatives for music lovers are the Art City Days Talent Festival on June 3 and World Folkfest in July. In August, the Sunday Concert Series resumes and will feature Troy Stevens, a gifted pianist and composer.