Former teacher makes book out of notes from home 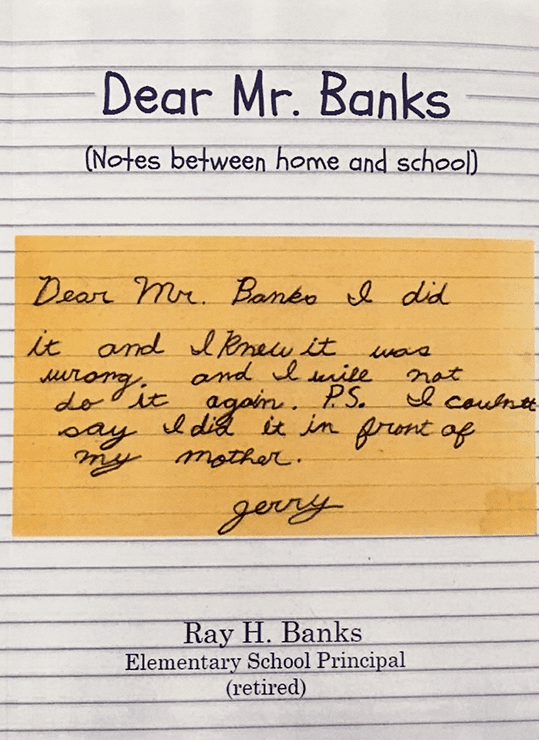 Spanish Fork local Ray Banks has recently published a rather unique book. Although listed as the author of the book, he might more accurately be described as the preserver and compiler of the notes that make up the 62-page book. The book’s introduction prepares the reader for what is inside: “Oftentimes communication between the school and the home is done in the form of a note. Sometimes the notes bring unintended laughs. This book contains some of the gems I collected and saved over my decades-long career as a teacher and elementary school principal.”

Early on in his career, Banks realized that some of the notes he received were worth saving. While the majority of the notes are addressed to him, some are from his colleagues who, knowing of Ray’s collection, shared with him some of the prize notes they received.

Notes from students include: “I am sorry for being bad. I am sorry for throwing a ball at his face on a axcident (sic),” and, “You were the best principal I’ve had out of 9 different schools. You are nice to students and teachers unless they’re mean to you.”

From parents: “Yesterday Pat was involved in an accident on the playground. The Dr. said I should observe him for unusual symptoms. If he acts weird or sick please send him home, however a hard head is one of Pat’s virtues.” And “Leslie was absent Monday and Tuesday for no apparent reason.”

Many of the original notes have now yellowed with age, Banks having retired in 1992. The technological advances of the last 25 years, along with the encouragement and help of his children, prompted Banks at age 88 to take the time to put this book together.

Banks worked full-time in California from 1955 to 1992. After retiring, Ray returned to Utah County and worked for many years as a substitute teacher in the Nebo School District. If this student’s note is any indication, he was a popular sub: “Dear Mr. Banks, you are the best teacher in the world, you rock, you no how to teach like non other (sic).”