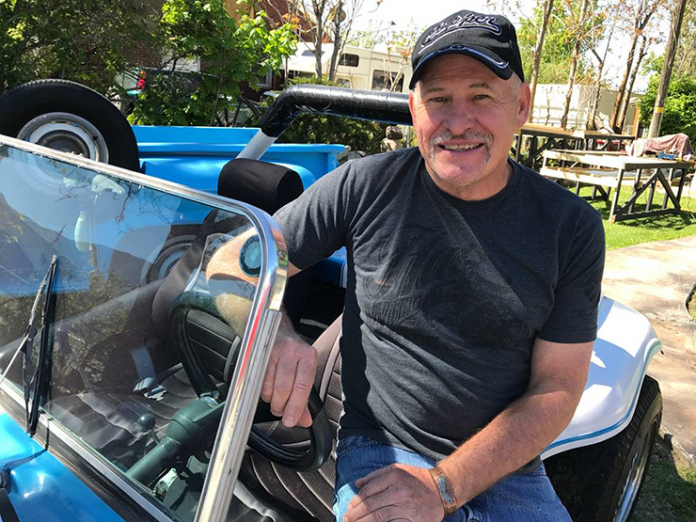 r Springville resident Jerry Gardner is likely most well-known for the creative and colorful snow sculptures he builds outside his house each winter. However, these sculptures are just a small part of the artistic creations and worldwide adventures Gardner has been part of during his lifetime.

Gardner will be honored as Springville’s Resident Artist during the 2017 Art City Days celebration June 3-10. He will ride in the Art City Days parade on June 10.

“I’m just a creative guy that likes to make people smile,” he said.

Gardner is originally from Provo. He attended Provo High School where he was named a Sterling Scholar in art, then studied art at Brigham Young University. The economy at the time was not supporting artists as much as he had hoped, however, so he switched his focus, eventually transferring to Utah Valley University and graduating from UVU in collision repair. He utilized his art skills when working on cars and was named national auto body champion through a competition sponsored by the Vocational Industrial Clubs of America. He also served a mission in Dallas, Texas, for The Church of Jesus Christ of Latter-day Saints.

After college graduation, Gardner taught in the UVU auto body shop for a year, then went to work for Rocky Mountain Helicopters managing its fiberglass and paint department. He designed and painted helicopters for Life Flight.

Following his work at Rocky Mountain, he moved to Catalina Island in California and studied art with Roger Upton for four years. During this time, he was creating drawings and oil paintings and selling his art as well as teaching scuba diving and traveling the world. Sometimes he would do paintings of people’s boats in the harbor and then give them to the owners in exchange for cruises on their boats.

After his time on Catalina Island, Gardner moved back to Utah, purchasing a home near the 400 South and Canyon Road intersection in Springville. He said he picked the home so he could hang glide off of Camel’s Back and land in his front yard. While he never actually landed in his yard, he did land in the vacant lot across the street where a church now stands.

Gardner started an auto body shop in Utah where he worked on restoring show cars such as Ferraris, Maseratis and Lamborghinis. He also worked with Don and Rick Vesco and their efforts to create a streamliner that would reach record speeds on the Bonneville Salt Flats.

Another of his interests is mining history, and Gardner enjoys exploring and painting scenes inside abandoned mine shafts. A collapse in one shaft trapped Gardner for a week until he could dig himself out, but he finished the painting he was working on.

Gardner also worked in the old Osmond studios in Orem constructing movie sets as well as for the BYU Museum of Art where he created the spaces where high-profile exhibits such as items from Masada and the Dead Sea Scrolls were shown.

He has been creating snow sculptures outside his home ever since he moved to Springville. They have become so popular that entire families and sometimes vans full of people will come to take their picture with the latest sculpture. Some people have even donated money to help him pay for the spray paint to color the sculptures.

“I’ve got to have a creative outlet in the winter and this is just my creative outlet,” Gardner said, adding that the sculptures are a way for him to give back to the community and make people smile.

Fans of his snow sculptures can see his work year-round in other Springville locations as well. Gardner painted the mural on the front of La Casita on Main Street and also assisted in painting the interiors of the new Strap Tank Brewery, Legends Motorcycles and the Sidecar Cafe at Legends. He creates metal sculptures as well, some of which can be seen at Legends Motorcycles.

“It’s just a passion to create something from nothing. I always want to be a part of the creative process,” Gardner said.