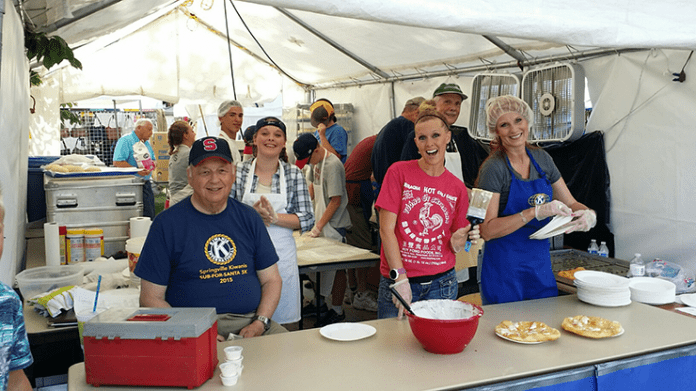 For some Springville residents and visitors, it’s just not Art City Days without the traditional hot scone dripping with honey butter. The Kiwanis service organization will be back at the city center park June 7 through 10 this year rolling, cooking and serving to raise funds for their charitable work during the year.

“What’s Art City Days without scones?” Dennis Moore told his family to hurry down and get in line because it’s a tradition to get a plate-sized scone every night.

“I wait all year for these,” Moore said. “You can’t get these anywhere else. I go ahead and have the honey butter and the cinnamon sugar since it’s only once a year – of course it’s four straight days, but oh well.”

Kiwanis Club member Doug Hamilton said, “This project is completely manned by volunteers – some 800 to 1,000 hours total just for the Scone Booth. The Key Club kids and the Youth Council kids are a great help, and, frankly, they’re a lot of fun to hang out with.”

Alan and Sharee Bird brought the scone fundraiser idea with them when they moved back to Springville from Spanish Fork in 1982, and they are still supporting it.

“It was a ward fundraiser in the beginning,” Alan Bird said. “I remember we had a contest to see who had the best dough recipe and then we used that. People made the dough at home and we cooked in big frying pans. Later we had Happy Market make the dough for us and we used deep fryers. One of the big discussions one year was about raising our prices. That’s when we added the homemade root beer and charged a dollar.”

Kiwanis member Brent Haymond described the changes that have been made to accommodate the crowds. “The challenge is to have consistent, perfect scones for over 5,500 people,” Haymond said. “Hills Bakery at Reams makes the dough now and it’s literally a ton of dough. Then we have to get it rising just right and pressed and cut. About 10 years ago, I saw an automatic press and Martin Conover drove down to St. George to buy a used one that cost $2,600. It’s really saved us with the volume of scones we make.”

The scone booth is the main fundraiser for the service club in addition to several smaller community projects. The majority of funds are donated to their extensive Sub-for-Santa project in December. Other major projects include the Children’s Art Festival held during Art City Days at the Springville Museum of Art and four college scholarships given to graduating Springville High School students.

“We use 100 percent of the net funds we raise to help our neighbors right here in Springville,” said Mike LeFevre, current president of Kiwanis. “Last year at Christmas we were able to provide gift cards for 725 children, and with the generous donations of this Springville community, we also distributed to families almost 400 boxes of food totaling about 13 tons.”

LeFevre, Haymond and their crew of volunteers all agreed that the reason their product is a top seller is word of mouth – “plus it’s prepared with enthusiasm and has a delicious homemade taste.”

“I’d have to say our scones are the best you will ever eat,” Haymond concluded. “It’s a top-secret recipe and since they are so addictive we have to limit customers to no more than six or eight a day.”

To enjoy a scone with honey butter for $4 and ice cold root beer for $1, visit the Kiwanis Scone Booth set up right on Main Street in front of the police department and city offices. They now have the ability to accept credit cards.